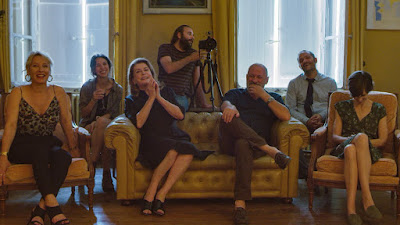 An a family prepares for the matriarch’s 70th birthday party things are thrown into chaos when the prodigal daughter returns after several years away. While she is largely welcomed back with opened arms, she rapidly begins to unspool causing old wounds to open up.

HAPPY BIRTHDAY is a sweet little family comedy drama. Taking place over the course of one afternoon and evening it is a small little confection of a film. It is a beautifully acted film with some of France’s best actors having a great time playing off of each other. I had a grand time watching the film. It made me smile with it’s warm portrait of family and made me think about the dynamics of family and how handle dark little secrets or crazy family members. It’s very much like hanging out with some really good friends

In regard to this being like hanging out with good friends I have to admit one small weird thing about watching the film - As much as I like the film, watching it was a weird experience for me. Because the film stars a cross section of France’s best actors and because many of them are playing roles similar to other films playing at Rendez-Vous with French Cinema (Catherine Deneuve in THE TRUTH) or even recent ones at the local cinema (Vincent Macaigne who was just in NON-FICTION) the film seems to be a continuation of other completely unrelated films. This is the result of actors looking as if they are characters in other films. I kept waiting for references to the other films.

I doubt very much you will have the same reaction, however it will give you an idea that this film has a nice warm and friendly feel to it

Ultimately I really like HAPPY BIRTHDAY a great deal. This is great time with good people and highly recommended