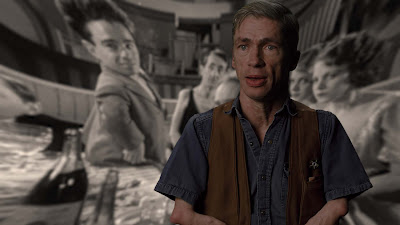 Partially funded through Kickstarter, Salome Chasnoff’s Code of Freaks tries nothing less than a total, exhaustive examination of the portrayal of disabled characters in Hollywood cinema. The documentary is clearly a passion project for Chasnoff and co-producer Carrie Sandahl, the latter a self-professed “disability wet blanket” who “ruins movies” featuring disabled characters—at least according to her original production abstract. The film itself channels this wet blanket tendency, as it can be seen as one long tongue-cluck and eye-roll for over a century of alternatively insulting and misguided representation.

Taking its name from Tod Browning’s infamous 1932 film Freaks which featured an extensive cast of circus performers with authentic congenital disabilities, its various talking heads treat that cult classic as the high point for disability representation with literally everything else before or since representing various nadirs. Chasnoff’s group of experts giddily tear through a number of cinematic sacred cows with uncomfortable, frequently trenchant insight: William Dieterle’s The Hunchback of Notre Dame (1939) apparently doesn’t actually humanize its Quasimodo and regards his deformities with pornographic glee; Michael Tollin’s Radio (2003)—boy do they hate this one—is actually about a mentally handicapped black man choosing and celebrating his own subservience to white people; Ben Lewin’s touching The Sessions (2012) about a paralyzed polio patent who hires a sex surrogate to lose his virginity in reality proves that disabled sex can never be authentic, only mercenary and transactional. The shakedown goes on, skipping from one popular film to the next before we have a chance to breathe.

If it sounds like none of these interview subjects like movies, rest assured the suspicion is well-founded: at the end Chasnoff asks her talking heads if they like any movies about disabled people and they unanimously, triumphantly say no. It’s curious, however, that Chasnoff doesn’t ask this question of Tekki Lomnicki and Mark Ervin, the two most severally disabled interviewees, both of whom previously admitted that, yes, they like movies about disabled people: Lomnicki, a little person, rhapsodizes about the prospect of an espionage romance between disabled spies and Ervin, a paralytic, waxes warmly on the portrayal of fellow paralytics in Farrelly Brothers movies. Maybe their enthusiasm didn’t fit Chasnoff and Sandahl’s “abstract.”

Code of Freaks is less documentary that graduate dissertation, sucking the life and curiosity from its subjects with all the cold sterility of a university library archive.