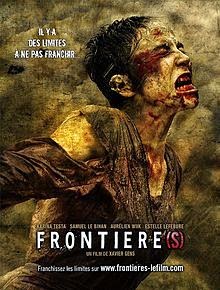 Belt yourself in boys and girls and put on some plastic ponchos it’s going to be a bloody ride.

Frontier(s) appeared on the scene seven years ago with a killer reputation. It was supposed to be completely bat shit crazy and it was destined to be the next big thing. The trouble is it was so violent and bloody that the film never really made it to theaters in the US and in some countries it had to be trimmed to please the censors. Also coming on the heels of several other films it kind of got sidetracked (it didn’t get lost).

The film is the story of several friends who flee from Paris after taking part in some violent protests that followed a presidential election. One group sped immediately in to the country while another followed close behind after leaving one of their number at a hospital. The first group finds the perfect place with accommodating staff and good food. Unfortunately the staff also is made up of Nazi cannibals who like to eat their guests.

As crazy as it wants to be horror film will almost assuredly make you sit up and take notice. You can’t not be rocked by the violence which starts nastily in the riot sequences, rears its head here in there in the middle section before seizing center stage by the entrails of the final third. This is as bloody a film as you’re likely to ever see with really nasty acts of human cruelty. By the end characters are literally painted with blood.

I am in awe of the film. This is just off the charts nuts.

And yet ultimately I’m really mixed on the film. The problem is that somewhere in the middle section, somewhere between the first arrival at the inn and things starting to go crazy after the second groups arrival the film’s pacing goes off. What was a tight fast paced thriller slows down and we get too much time to think. As much as we are carried along the idea of the Nazi run in makes less sense then if it had just been crazies. It also plays out as a kind of Gaelic Nazi riff on Texas Chainsaw Massacre. Of course once things get going it goes beyond Hooper’s classic film, but for while it seems like we’re in a French county in Texas. Its not that the film ever becomes bad, not by a long shot, it’s more the spell of the first part of the film is broken, or if not broken, it’s cracked. It does recover but it does knock a bit of the shine off.

However don’t let my slight reservation keep you from seeing this film because once the film kicks back into high gear you’ll be staring at the screen in complete disbelief since the film rewrites the definition of bat shit crazy in the final 35 or 40 minutes. Trust me you won’t know where this is going.

A blood soaked must see for the strong stomached
Posted by Steve Kopian at February 14, 2015