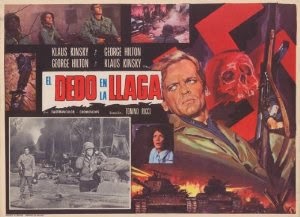 I discovered this film when Anthology Film Archives ran the film as part of their retrospective of Klaus Kinski films . What intrigued me was that Kinski was playing an American when normally he played bad ass Nazis. Actually having seen the the film it’s not surprising Kinski played the role he does since he’s a real bad ass.

The plot of the film has two prisoners sentenced for murder. Ray Saunders is sentenced for killing surrendering Germans as well as his commanding officer who tried to stop him. Kinski is sentenced for various misdeeds including killing an elderly civilian when he was robbing he house. The pair are taken out to the country for execution by newbie lieutenant George Hilton. A stickler and by the book he rubs everyone the wrong way. He he also goes the wrong way to the execution site and they end up in the middle of an ambush which kills everyone except Hilton, Saunders and Kinski. The trio then head off, at Kinski’s direction away from the war. Eventually the end up in a small Village looking to be liberated.

I love the first half of this film. It’s a dark poke in the eye at Hollywood notions of who the good guys are and who the bad guys are. Hilton, the by the book American is a twit while the two bad guys are, as bad as you think they are, the sort of guys you want with you in a fight. Kinski is a cynical as they come and his world view is not the sort of thing you’d ever see I a lead character, or if not in a lead then in American soldier of World War 2 vintage.

Unfortunately at about the 45 minute mark the film stops breaking new ground and instead falls solidly on to the clichéd path when the trio encounter a small village. What happens at the village isn’t bad, actually it has some great scenes with Kinski acting up a storm and some killer battle scenes, the problem is that ultimately it isn’t anything we haven’t seen before (not to give anything away but the two anti-social soldiers find something worth fighting for). The change over isn’t fatal, it’s disappointing but not fatal. Actually what it does is make what’s a truly great film to start a very good one at the end.

If you like action, if you like war film and if you’re a fan of Klau Kinski this is a film to track down because it really kicks ass.

BTW- there are a couple of version of the film out there on DVD , go for the widescreen since the film puts it to good use