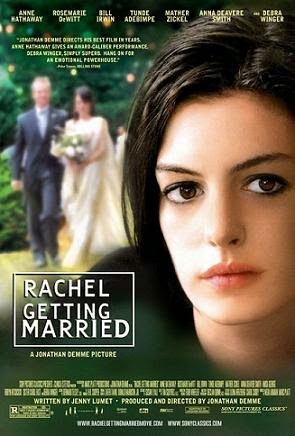 I would have sworn that Anne Hathaway was going to hit cinematic gold with Rachel Getting Married but the film kind of rolled over and no one much paid attention. I’m guessing that’s because Hathaway was much too good at playing a truly unlikable person.

The rough plot of the film has Rachel getting married. Into the mix comes Anne Hathaway who is Rachel’s sister. She’s a handful under the best of times, but having her around at a high stress time like a wedding is just asking for trouble.

As a drama the film is a mixed bag. To be certain the film hits certain points about families and big events, but the way the film works best is simply as a portrait of a troubled soul looking to reconnect with the family. so long as the film remains focused on Hathaway the film is great. When it’s not it’s less so.

To be honest I’m not sure if Hathaway will ever be this raw again. Somewhere between her springing on the scene and her winning her Oscar she would take some challenging roles or things you wouldn’t expect. Havoc for example was a shock to many of the few who saw it since coming after the Princess Diaries it was a bit raw, it also had Hathaway nude, which is the reason many people remember it (or search for it). Here Hathaway plays a full on pain in the ass. Sure she can be nice but you see by the way everyone walks on eggshells around her (and by her behavior) she can be a trouble. It’s not a likable role and as good as it is when the film ends you don’t want to go back and revisit it. (I know I don’t despite the film haunting me)

If you want to see a truly great performance that has been completely been over looked look no further than Anne Hathaway in Rachel Getting Married.
Posted by Steve Kopian at February 22, 2015