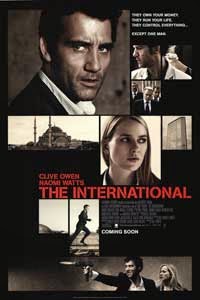 Tom Twyker’s The International is a slam bang action thriller that for most of its running time is everything you could want in a thriller. It’s has great performances, jet setting intrigue and action set pieces that kick serious ass. The film however briefly missteps in its final third making what should have been one of the truly great top ten thrillers of the first decade of the 2000’s one of the better one.

The plot of the film has Interpol agent Clive Owen and Manhattan DA Naomi Watts investigating a link between big banking and the arms trade. The investigation takes them around the globe and back again as the bad guys stop at nothing to keep the money flowing to them and the arms flowing to their customers.

This is a great popcorn film. This is one of those films where you curl up on the couch with bowl of popcorn and soda and forget your worries. It’s a film that moves like the wind so you don’t think about what’s happening and it’s written smartly enough to let you know that the filmmakers actually have an idea about what they are talking about.

The problem with the film comes late in the game with one of the final action set pieces, the shootout at the Guggenheim in New York. Things begin to go wrong when Owen hoofs it to the museum in record time, a physical impossibility (okay yes I know it’s only apparent if you know Manhattan) . Things then go off the rails once he gets there as a huge firefight breaks out. The problem with the sequence isn’t that its bad- its an amazing piece of action work, the problem is that compared to the rest of the film it’s so wildly over the top and out of place for a film that has been more or less realistic, that it breaks the spell. Yes I know part of you will be cheering at the excitement of it all but another part of you will be wondering where that came from.

Don’t get wrong it doesn’t kill the film, it just kind of disappoints for a few moments.

I really do love the film. I think it’s great. It’s sort of the intellectually perfect 1960’s spy thriller done today. Its an amazing film that I end up watching every time I stumble on it on cable.

If you’ve never seen it you should

And if you have seen it see it again
Posted by Steve Kopian at February 21, 2015