The unheralded John Carpenter at the Brooklyn Academy of Music


John Carpenter: Master of Fear from BAM on Vimeo.

BAM's John Carpenter series starts tonight. It was supposed to start with Carpenter sitting down for a chat at the Opera House, but he had to cancel due to illness (though it's canceled I'm told they are trying to reschedule).

I was going to write up all of the films for Unseen but I kind of think that isn't the best way to do things. You all know about HALLOWEEN and THE THING and ASSAULT ON PRECINCT 13 and ESCAPE FROM NEW YORK and a bunch of the others but there are a ton of other films you probably don't know about. Or even if you do know about them you may not think they are worth your time seeing them.

Well the are. All of Carpenter's films are worth seeing for one reason or another.

In order to steer you to some films you may not thought of I'm going to do a piece  talking about a few in brief. I should probably do full reviews for each but if I did the pieces would run possibly too close to the screening for you to get tickets In order to prevent that I'm going to do one piece here and now and let you get tickets before the screenings sell out. DARK STAR was Carpenter's first film and it changed film forever. Made with Dan O'Bannen who also stars, the film tells the story of  the space ship Dark Star which goes around destroying unstable planets and suns. The trouble is the crew has been out there way too long A wickedly cool ultra low budget film this is the film that effectively is responsible for everything that followed Jodorwowsky's Dune to Alien and onward. That's not hyperbole since if this film didn't exist Dune wouldn't have gone into production and brought together all the minds that  change films. Yea Carpenter didn't work on Dune but he worked on this film with O'Bannen who did....then again Carpenter went off and did something called Halloween so you see this film changed everything. Its clunky and cheesy and often funny for the wrong reasons but its ahell of a lot of fun. 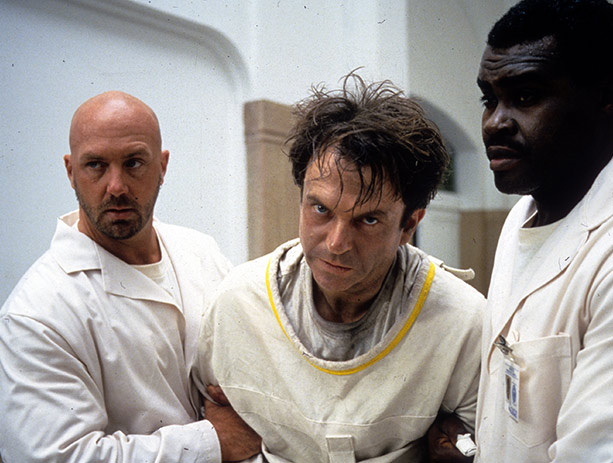 IN THE MOUTH OF MADNESS makes no sense. It a hellish trip into the mind of a deranged individual and  by the end you won't know which way is up. I have no idea if its a good movie, I mean pieces don't work, but the fucking thing hangs with you forever and it becomes like a stain on your soul. One of the best films Carpenter ever made because it's so out there. MEMOIRS OF THE INVISIBLE MAN was a big budget flop. It has Chevy Chase as man who is rendered invisible when a scientific experiment goes horribly wrong. This sets the government after him. Part science fiction, part thriller, part comedy this is probably the big WTF film of Carpenter's career. It kind of fits in with all he did but its a big budget seeming A list project that doesn't completely work. WHile not for all tastes this is an okay film that should have been better. I seem to remember the studio being involved with it to the point its one of the projects with too many cooks spoiling the broth. Its worth seeing for the adventurous because there are some great moments in it and you realize what might have happened if Carpenter had done more of these films. PRINCE OF DARKNESS is strange little film.Some people have argued that it's Carpenters best film and a hidden masterpiece. I don't think so. I think it has great mood and sense of place and can be damn creepy- however I think there are some gaps in the plotting that derail it.  The film concerns an scientific examination of a cylinder of turbulent glowing green material found in the sub-basement of a church in the run down part of town. There is something weird about it and its suspected that its really "the devil" or what passes for pure evil kept in check by the church above- or something. As I said it makes little sense but where IN THE MOUTH went balls to the wall nutsy fagin PRINCE is kind of restrained and is tto tied to a narrative to wholly work. My reservations aside it's Carpenter must see since when it works it one of his best films. 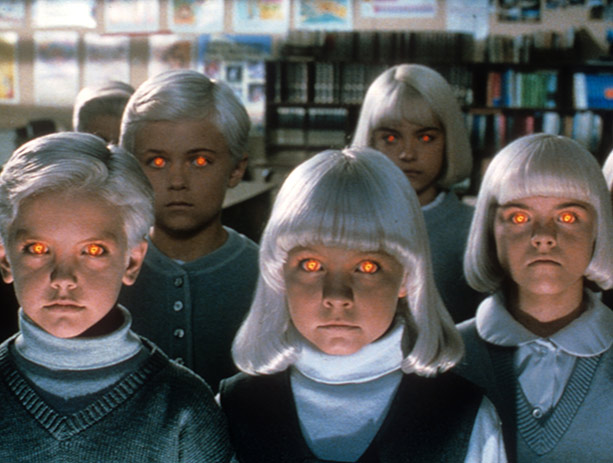 VILLAGE OF THE DAMNED is a remake of the classic story about these blonde geniuses all born after a particular incident where a whole town fell asleep and many of the women woke up pregnant. Of course the kids are evil and its up to Christopher Reeve to stop them before they can take over the world. While not as good as the source novel or the original film version, this is still a damn fine thriller with some wonderfully ghoulish touches such as people dying when they fall asleep grilling or driving. As good as the film is, and it is an unfairly forgotten gem,, the film probably would have been better in black and white- but that's just me, CHRISTINE is an adaption of Stephen Kings killer car story. One of the best films Carpenter has done the film seems to have been forgotten by most people. I have no idea why since the film has chills and style to burn. Carpenters use of classic rock and roll on the soundtrack is as good as it gets. If you've never seen it you must go. GHOSTS OF MARS is a mess.  I can't lie. This weird ass kind of cross between ASSAULT ON PRECINCT 13 and Mario Bava's PLANET OF VAMPIRES  and a few other films doesn't quite work. I know some people will argue that the film is the one Carpenter film you can skip, and they maybe right, but at the same time there are moments where it works. I think the real problem with the film is it's such a collection of bits from other films that it never finds its own voice .This one is probably for Carpenter completeists.

For tickets and more information go to the BAM website.
Posted by Steve Kopian at February 05, 2015