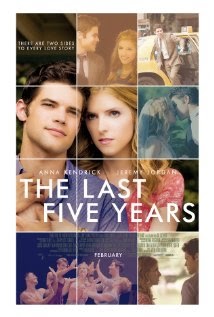 Or if not kill him, lets hurt him really badly. Or if not that lets make sure he never directs another film ever again.

Let me back up.

I'm a huge Jason Robert Brown fan. I've seen most of his shows. I can sing most of his songs. I saw and loved original Off Broadway Production of THE LAST FIVE YEARS. Chunks of the score live inside my head and pop up and out at random moments. I know reasonably well the the score and the show and I was really curious how you could hope to film a show that tells the the same story end to start and start to finish at the same time. I mean unless you have a really creative director you're going to end up with a mess of a film

Which brings me to why I want to hurt Richard LaGravenese, somehow the man who writes great creative screenplays such as THE FISHER KING, THE REF and BRIDGES OF MADISON COUNTY  has managed to take a great score and a great cast and sink the whole fucking thing into a container of cement where it sits frozen and unmoving. The whole thing is static to the point where there is no need to see the movie, when you can go buy the CD and have the same effect. Seriously except for two songs the film is inert.

Not based on the relationship Jason Robert Brown had with his first wife (despite the legal proceedings and payouts that would make you thing it was) the film charts the relation ship of Jamie (Jeremy Jordan)  and Cathy (Anna Kendrick). He is an up and coming writer and she is an struggling actress. We watch the relationship go from the end to the beginning for Cathy while Jamie's view is start to finish. The film and the show is largely a series of solos with only the middle song being the point where the pair duet.

The show, as written, is a wonderful stage piece. Its a show that works on stage because of the ability to take the songs and manipulate the togetherness of the relationship with the stand at the front of the stage and belt it to the rafters. It is a theatrical experience.

While I admire anyone crazy enough to try and film it, unless you had a great director, or one with a some sort of visual style or sense the film was never going to work

Which brings me to LaGravenese. He may have been crazy enough to get the film made he certainly had no ability to make the majority of the film actually work. Let me not mince words I do want to hurt him because he took one of the best scores Brown has written, two kick ass performers who sell the songs way better than I had hoped, and he mucks the whole thing up by pretty much doing absolutely nothing.

Whats gotten my panties in a bunch is that LaGravenese basically has the actors sing and not do much else. The opening number STILL HURTING is too static- with camera moves as Kendrick sits on the floor and we watch her sing. Sure the camera moves a bit but it's not enough. The pattern is repeated again and again as the sequences are framed so the actors can sing. Any motion or illusion there of is the result of the camera  or people in the background moving around. Largely it seems to be shots of one or both of the leads not doing anything. Even MOVING TOO FAST, which involves Jamie on a bicycle is unremarkable since there is no reason for it to happen that way. Driving that point home is the bit where he ends up on a ferry and just sings while walking around.

I will say that two songs work. The songs work because the sequences are more than just people singing or pretending to do something other than really just singing:

SHIKSA GODDESS, Jamie's first song made be temporarily forget the static nature of STILL HURTING. Here the film springs to life as Jamie relates what a find Cathy is. We see the passion between the two and Jamie reveals his past loves Its a brilliant sequence and had me believing in the film for its running time.

SUMMER IN OHIO, a Skype conversation Cathy has with Jamie.Nails it to the wall, It keeps the intimacy and manages to open it all up as we see what Cathy is actually seeing (The stripper and her snake, rehearsing a dance number). Its a brilliant piece of film making which gets letdown by THE NEXT TEN MINUTES which follows which is another song  dully shot. Its a shame since that song, the only duet is like lightning on stage and here just lays there.

When the film finished I cued it up again (oh the joys of VOD) and I put on head phones and just listened to the film.

You know what? the film is perfectly fine as an audio recording. Listening to it I realized again how good Brown's score is and how wonderful Kendrick and Jordan are. Its good enough I'm considering getting the CD.

Honestly my advice is buy the CD.  For the price of a movie ticket you can have something to listen to repeatedly with out having to look at the unimaginative images on the screen.

A major disappointment
Posted by Steve Kopian at February 13, 2015