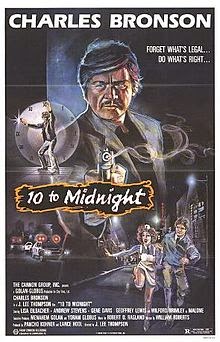 10 to Midnight is a mindless and disposable Charles Bronson film. It’s a lot of fun and I’ve seen it at least 30 times over the years but its disposable. It isn’t a film that enters into most Bronson discussions unless you’re talking about Bronson’s output at Cannon Films.

The reason the film has resurfaced at Film Comments Selects is to run as part of their look at Cannon Films. Charles Bronson was an important part of Cannon’s growth. The company took Bronson who was kind of on the decline and put him into a bunch of low budget big action films that reignited his career. Starting with Death Wish 2 and it’s three sequels Bronson became a big box office draw once more. Bronson, the badest of the bad guys would take on some bad guy and kick serious ass. They’d be lots of blood, maybe a boob or two and just enough mindlessness that you could smile as the carnage was happening. The films were never deep but they were fun. They were a reason for a good number of us to go to the movies everytime one showed up at the local cinema.

10 to Midnight has Bronson on the trail of a serial killer. Bronson takes it personally when he realizes that one of the victims is a friend of his daughter. The killer is a nice young man who goes around killing people while naked. Bronson figures out who it is rather quickly but it becomes a game of cat and mouse because the guy gets off on a technicality.

The film isn’t high art even by Bronson’s Cannon Standards. Its more than a bit over the top and contrived . Even so the film is great deal of fun, I’m considering getting a ticket when the film runs Saturday because it’s so much fun(the ending is something that will stay with you though and gets a great reaction in a crowded theater) . If you want to see an old school popcorn film get to Lincoln Center and see this film. I doubt you’ll remember the film in a week but you’ll have a great time.

For more information and tickets go here
Posted by Steve Kopian at February 17, 2015