NYICFF 2015 A whole bunch of shorts

I was given the chance to see a random selection of shorts from this years New York International Children's Film Festival. The films I was given were from all of the collections. I was also given five films that are screening as part of SHORTS ONE and SHORTS TWO but I have tickets for those collections as well so unless I fail to make those screenings I'm holding off until I can see them on the big screen. 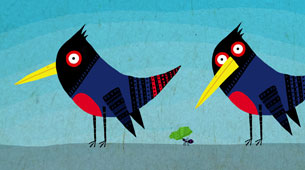 SHORTS FOR TOTS
PIK PIK PIK
It starts with a Bird trying to eat the ants that are cutting leaves off the tree it lives in and goes from there.

A beautiful marriage of image and music. Forget that this is in the Tots section this is just a great film. The best thing I can say I want to see this with an audience. 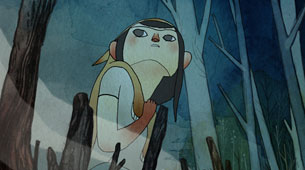 HEEBIE JEEBIES
GOLDEN BOY
The disturbing story of a boy with an over sized head and what happens when his father takes him to town one day.
A dark look at greed and consumerism is a messed up marriage of electronic music and image. It just feels wrong at the start and just kind of goes from there. I mean that as high praise.

FADED FINERY (Oripeaux) has a girl befriend a pack of coyotes until the towns folk put a stop to it...but a change is coming. Nice little fable. not really a film to fill you with Heebie Jeebies but decidedly dark and not for kids. 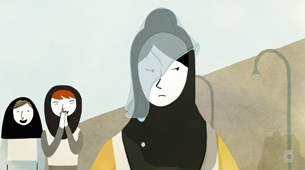 GIRLS POV
BEACH FLAGS is the story of some Iranian female life guards training to take part in an international competition.Things become complicated when a new girl is brought in to compete.
This is a very sweet little film about life in Iran and giving up a dream for someone else.

LAYLA'S MELODY is a documentary about Layla who lives in an orphanage in Kabul. She loves music and learning and is a shining light in the darkness.We watch as we see her explain her life and love and we see her meet her mother for the first time in five years.

This is a deeply moving film about a young girl, what she loves and the possibility of hope in the future. Pure magic.

MARINA'S OCEAN concerns a girl with Down's Syndrome who wants to go to the ocean, however he mother can't send her so she contrives to get her self there.

Utterly charming film about a young girl who is going to make her dream come true. I was going to say that this film would make a lovely feature until the dedication at the end broke my heart and now has me thinking best leave the film as is. 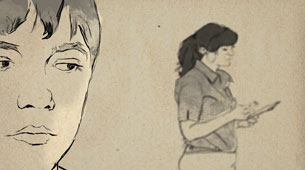 FLICKER LOUNGE
FIRST STEP is the story of Sasha a young skater being trained to be a champion. All he wants to do however is skate with the object of his heart the ice dancer Rebecca. This is a nice little film

OH MY DOG is about a dog talent show. Wickedly funny and tasteless look at any sort of contests especially where stage mothers are involved. I'm upset I won't see this with an audience of kids and their parents. The kids will love it and the parents may cringe but either way both will be laughing.


For tickets for any of the short collections go here.
Posted by Steve Kopian at February 26, 2015