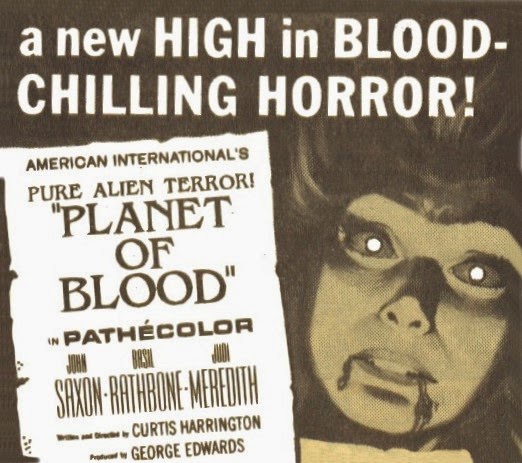 Late one night I put on a double feature DVD that started off with Curtis Harrington’s Planet of Blood. Watching the film for the first time in years I found that it played much creepier than I had remembered it.

The film begins with an alien species contacting earth to say they are coming to make formal contact. Their ship crashes on Mars and and earth ship is dispatched to attempt a rescue. They find only one strange woman who they take on board. Once they are heading back to earth things begin to go wrong as people begin to die, drained of blood… could it be their new passenger?

Largely a standard 1960’s B science fiction film the film’s creepiness comes from the look of the film. From the strange art seen at the film’s opening. Weird landscapes set the mood. The mood is further enhanced once we see the alien who is just off enough from being human that she radiates a feeling of not being right. It’s a feeling that pervades everything even up to the cliché gotcha ending.

Don’t get me wrong, this is not high art, this is a workmanlike B scifi film. It’s a bit more than the drive in fodder than it was made to be, but at the same time there is something about it that keeps it hanging in your head as something that gets revisited.

Of course it doesn’t hurt that the cast is made up of a rising John Saxon, the soon to be counter culture superstar Dennis Hopper and fading star Basil Rathbone who all sell the nonsense of the plot.

I really like the film a great deal and if you want to see a solid little horror film give it a go.
Posted by Steve Kopian at February 13, 2015