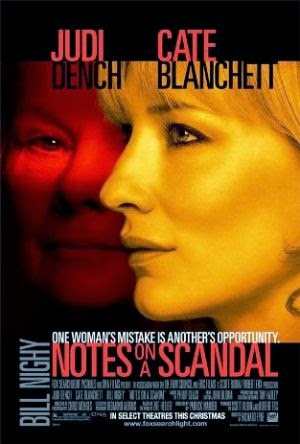 Notes on a Scandal is a really good, very over looked film starring Judy Dench and Cate Blanchett. Its a film that has powerhouse performances across the board but is the sort of unpleasant potboiler that you can admire but which you really don’t ever want to revisit.

The film is set at a public school. Judy Dench befriends new teacher Cate Blanchett. As the friendship between the women grows, Dench becomes aware that Blanchett is having an affair with one of her students, this of course will not do, not so much because of the taboo teacher student relationship, rather it’s because Dench wants Blanchett for herself. Knowing that she can’t have her friend she then sets about destroying her.

A beautifully made, perfectly acted film, but it’s so downbeat I don’t know anyone who has ever seen it twice. I know many people who have seen it and will wax poetic about it, but no one who wants to go to the headspace it creates a second time. I don’t know if that’s a good thing or a bad thing. I mean Richard Eyre has essentially made a perfect film that no one wants to view.

I know there are films I don’t want to see again. I love and hate the doomed romance of Map of the Human Heart but I find it’s ending so heart breaking I never want to go there again. Frankly I turn it off before the ending. But that’s the ending. That’s not the whole film. I don’t ever want to see a frame of the film again…

And at this point you’re going Steve, why are you recommending the film- because it’s a great film. Its that simple, Notes on a Scandal is a great film-depressing as all hell, but great. Remember just because I point a film out to you doesn’t mean you should see it, it simply means it maybe a possibility . If you want to see great acting and a depressing potboiler see Notes on a Scandal- otherwise stay away.
Posted by Steve Kopian at February 27, 2015