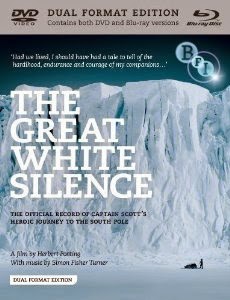 Herbert Ponting's records of the failed 1910 Scott expedition to the South Pole are both fantastic documentaries and killer adventure films. The films are still visual gut punches full of images the likes of which we've never seen despite a hundred years of other expeditions and endless nature documentaries.

Before I go any further I should explain that 90 Degrees is the sound version of Great White Silence, put together some ten years after the first film it dropped the inter-titles and added new narration. For the most part all of the footage is the same, though slightly differently arranged.

Ponting documented almost everything that happened with the Scott expedition and the wealth of footage really puts you in the ice with the men. What helps sell eveything is that the films tell the story from Pontings point of view. He is a character and he takes great pains to show you what he went through to get the footage. Normally this would make the film a bit self-serving, but considering how amazing the things he was documenting were, its just cool to see what he had to do to get the shots.

The film is a record of the Scott expedition. We watch as the men set off on their trip and then set up a series of camps. We also watch as Scott and his men head off into the great white silence where they would meet their end. Its respectful look at what happened.

As good and amazing as the film is there is a great sadness to the story behind the film. While Pontings film ended up in newsreels upon their return the release of the footage was delayed by the First World War. By the time Ponting was able to go on a lecture tour the money had kind of dried up thanks to several foundations set up in Scott's name getting there first. While the lecture tour that followed the war helped the cameraman hone the organization, the film upon its release met with critical acclaim but so so box office. The film didn't make the money he had hoped. After the advent of sound Ponting recut the film and added narration. Again the box office was lukewarm and Ponting was, according to what I read, forced to remain struggling to get by.

By the time the final fatal trek begins the mood turns somber and incredibly sad. Pontings use of staged footage, shot before the group headed into the wild, coupled with the illustrations and excerpts from Scott’s diaries make the final section a tough slog. We don’t want to watch the men go into that good night. I’ve seen several adaptions of the the story and numerous documentaries and none hare as affecting as this film- I know why the restoration ends with several minutes of black run off-simply because you’ll end up stareing at the screen for a couple of minutes when its all over.

The BFI recently restored the film using various prints of the footage in existence. No full version of the film is known to exist and the BFI had to piece one together based on notes. They tinted the film based upon notes on some of the film prints. And then finally they added a haunting ethereal score which adds much to the film. If you want proof as to how much music adds to a film compare this version with the sound reissue 90 Degrees south and then watch the film without any music.

The film is a true cinematic treasure, especially in the BFI restoration.

90 Degrees South is the sound version of the Great White Silence and it’s very good. I can’t really say which is better since both the sound and silent versions have their pluses and minuses. Additionally how you react to the silent version will depend upon how you feel about the music played with it. The ethereal score on the BFI restoration is incredible and adds a great deal to the film.

Largely using the silent film's inter-titles as a basis for the narration 90 Degrees does have additional information in its narration (though don’t ask me what, I don’t remember).

Is this a better or worse  version than the silent version?  If you're watching the BFI silent restoration with its score it's then the silent film is better. If you can't see it go for the 90 Degrees is fine.
Posted by Steve Kopian at February 07, 2015