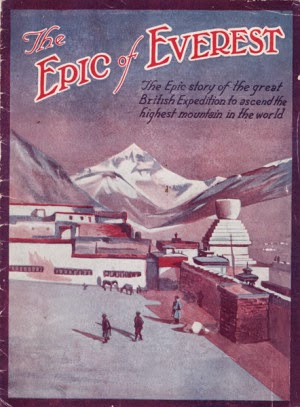 THE EPIC OF EVEREST is considered by some in the UK to be a national treasure. The film is a cinematic record of the assault on Mount Everest that ended with the disappearance of Mallory and Irvine. While no one knows if they made the summit, however it is known that they had reached the higher on the mountain than anyone before them.

The film was recently restored by the BFI with a new score, a restoration of the original score plus examples of the Tibetan music that was played during the big to do screenings when the film premiered. The film also had a roughly month long run at the Rubin Museum of Himalayan Art in New York. I had hoped to get to the Rubi to see the film on the big screen but the period it played coincided with the time between Thanksgiving and Christmas so I was occupied with other stuff. However the film haunted me so on Christmas night I pulled out the BFI DVD and watched it.

Less a full on document of the assault on Everest and more a kind of travelogue of the trip to the mountain, I can completely understand why the film would be considered a treasure for audiences in the 1920’s, especially those who saw it in its original presentation as an evenings entertainment with Tibetan musicians and live narration. If I had known nothing of the remote areas visited this film would have blown me away.

The trouble is looking back with 90 years of distance the film is a gloriously filmed document that is frequently static and posed. There are lots of shots of the mountain, of villagers in their finery and the of the expedition team standing around smiling and preparing. Yes there are scenes of things actually happening, including shots of Mallory and Irvine disappearing as they approach the summit, but mostly it’s tableaux. Its spectacular but at the same time a little goes a long way.

The other extremely glaring problem is that unlike say THE GREAT WHITE SILENCE, which this film was designed to mimic, this film requires you to know about Mallory, Irvine and the trip. Where the earlier film explained everything you needed to understand the story, here there is a little in the way to put things into context or to explain anything. We are given slightly purple prose title cards about what we are seeing which seem more intended to pump up the glory of the achievement rather than give any real information. It’s nice but I didn’t feel like I learned anything.

I watched this with both of the scores that are on the BFI discs. The original full orchestral score works at times but at others seems weirdly out of place and over blown. The orchestral score tries a bit too much to pump up the proceedings and doesn’t always work. The new score is more scene specific and rather low key. Listening to it is like listening to some low key music you’d use to meditate to. Listening to it I found myself drifting off to sleep. Don’t get me wrong, it’s lovely, but it’s a bit too restrained.

Should you see the film? I don’t know. If you’re not interested in the various assaults on Everest I would take a pass, since while it has footage of historical importance, without a context the film just sort of it. Ultimately the best thing I can say about the film is I’ve seen it twice now and I never need to see it again.
Posted by Steve Kopian at February 08, 2015