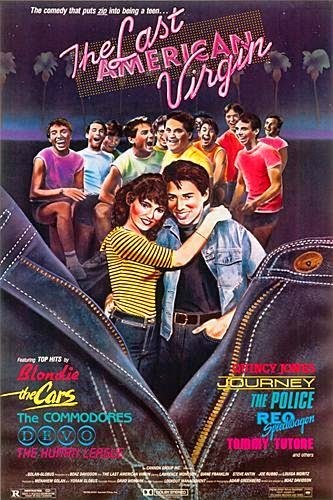 I don’t like The Last American Virgin. I don’t like the downbeat ending of it, even if it’s rather realistic.

The film has three guys going around trying to pick up girls and get lucky their exploits make up the plot of the film, with the title referring to Gary, the nice guy who never gets lucky.

The film was an attempt to Americanize the Lemon Popcicle series(actually the first film in that series) that was coming out of Israel and was hugely popular around the world. The series ran for years on either side of American Virgin. The guys at Cannon hoped to catch lightning a second time by restarting the series in America. The film made money but never spawned more films.

Coming in the middle of a spate of teenage rom coms in the early 1980’s the film stood out by being more intelligent, more realistic and a tad darker than other films floating around (say MY TUTOR). Some people gravitated towards it, and it remained enough alive in people’s memories that it is still being talked about almost 30 years later.

For me the fact that the hero, whom I very much identified with when the film came out didn’t get the girl, left me crushed- especially in the way it happens here. I didn’t want to know that I couldn’t win and that all the girls of my dreams were out of my league. I avoided the film like the plague for years after seeing it the first time.

The thing is that while other films made at the same time have come and gone  this film is still being talked about and still being shown at film festivals. For me this film has hung with me for the last three decades  where other films have faded from my memory. Of course its the ending that makes the film, but the ending works because the rest of the film makes you care enough to be bothered by it.

If you’ve never seen it go see the film when it plays Saturday at Film Comment Selects since you’ll see a survivor.

For tickets and more information go to the Film Comment Selects page.
Posted by Steve Kopian at February 16, 2015