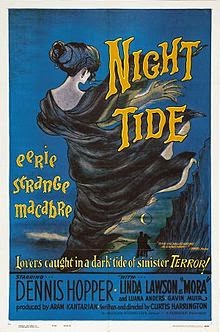 Curtis Harrington really has to be one of the most under rated directors in Hollywood. I’m guessing it has to be the result of his output being small and his working almost entirely in B genre films. While they may not seem like much the films are the sort of things that hang with you. He is slowly developing a following beyond film fans in the know  to the extent that I was recently asked about Harrington by someone in my office.

Night Tide is one of his small gems. A moody fairy tale about a man (Dennis Hopper) in love with a mermaid. Well she says she’s a mermaid, she plays one in a carnival, but the questions are whether or not she really is, and whether this means doom for her and her lover.

The strength of the film is not the shocks, rather it’s in the atmosphere and mood. There is a pervasive sense of doom hanging over it all. These are not happy people and we feel it. The thought of happiness, while something to strive for is not something that really is a possibility, you can pretty much feel this is all going to go wrong.

Harrington manages to take this small unremarkable thriller and turn it into something haunting. Perhaps it's the matter of fact way he shoots the film, I can't think of anything that's flashy or maybe its the great cast headed by Hopper ], that manages to sell the film because they seem to believe that what they are doing. What ever the reason this film works better than most other big budget films made at the time or since.

To be honest the first time I saw the film I wasn't particularly impressed. Its a film about murder and madness and mermaids and doesn't on the face of it seem to be something special. Then not long after I saw it started to think about it. Not only think about it but I had it buzzing around my brain making me feel kind of frosty. The film hung with me and I found I had to revisit the film. I do that now and again when ever Harrington or the film is mentioned- I pull it out and just ponder.

Definitely a small gem worth seeking out.
Posted by Steve Kopian at February 09, 2015