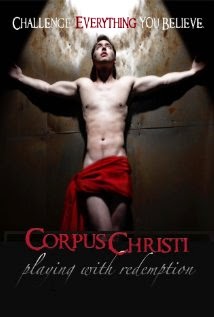 Documentary on Terrance McNally's play Corpus Christi and a production of  the play in 2006 that ended up touring to acclaim internationally. The play is controversial because it imagines the life of Christ happening in Texas among a group of gay men.

Full disclosure I saw the play during it's original 1998 run. My attitude toward the play was that if there had been no controversy the play would have disappeared without making a much of a blip. I also thought that had they not removed the intermission most people would have walked out.

On the other hand I know the play speaks to some people.

The film is a good look at the play, the controversy and how it speaks to some people. Interviewing the cast and production staff behind the touring production as well as McNally, Larry Kramer, Norman Lear and other people who fought for the play to be put on originally the film is a nice look at the history of a play that still has the power to inspire and annoy.

While the film didn't change my mind about the play, I did like that the film explains why the play speaks to people and why its not as bad as some people make it out to be. (I love the story of the original Jesus tells about how the plays biggest opponent in New York regaled his followers about what was in the play even though he had slept through it.).

Is it a perfect film? No. Its probably 20 minutes too long and its a bit too loving in its view of everyone and everything, but for those with an interest in the subject its worth a look.(I'm not sure many people without an interest will get anything out of it.)
Posted by Steve Kopian at February 25, 2015