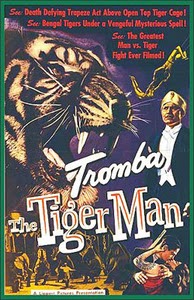 Moody German thriller about a tiger tamer who returns to a circus after 7 years away. His act involves controlling tigers with hypnosis. However things are complicated since when he left the circus years before he was suspected by some in an accident which left one of his lovers injured. Worse one of his ex- girlfriends wants to go back to things being hot and heavy...and he's just met a new girl who is the daughter of the circus owner

A dark brooding film that gains numerous points from simply being in black and white. You may think I'm daft but it's true, this potboiler works simply because of the look of the film. Its exactly the thing you'd want to put on late on a dark and stormy night so you can cuddle with some one you love.

If you were to strip the black and white away or to look at the film straight on then you'd realize that the film is a sleazy potboiler. Of course the film over comes it and ends up being a great deal of fun.

Thank you Sinister Cinema for saving this from obscurity.
Posted by Steve Kopian at February 06, 2015