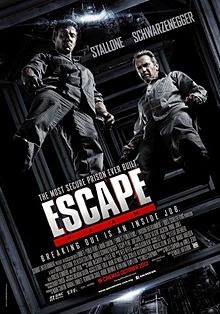 Stallone and Schwarzenegger team for more than a couple of minutes in ESCAPE PLAN an action thriller from Mikael Håfström the director of 1408,The Rite and Shanghai.

The plot of the film has Stallone playing man who makes his money by checking out prisons to see if they really are escape proof. His firm is hired by the CIA to go under cover at a facility that is holding international bad guys. The trouble is once he get in things go wrong. The code word to keep him safe doesn’t works and warden who is supposed to be in charge is nowhere to be found. Worse his support team can’t find him so a rescue is out of the question. Forced to rely on his own wits he teams with Arnold to plan an escape.

A pure popcorn film, this is a movie that is way better than you’d ever expect it to be. I say this because a good number of the recent films by the stars have been less than thrilling. Either the plots have been blah or the action weak. Here the balance is great and the film just hums from start to finish. There is great action and a few wonderful twists of the sort you won’t see coming.

Is the film perfect, no, Vincent D’Onofrio kind of sleep walks through his role, but outside of that bump this is a damn good film that I ened up watching a couple of times in a row when it showed up on cable.

Recommended for any night on the couch.
Posted by Steve Kopian at February 24, 2015