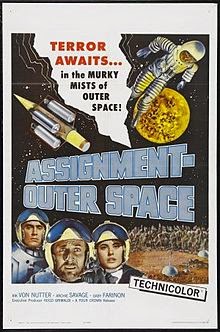 Assignment Outer Space
Badly dated Italian space opera made at the height of the space race has a snotty reporter going into space to cover events. the head of the space station he's visiting who views him as an intruder, a feeling that gets worse when the reporter causes precious fuel to spill into space when he goes to save a astronaut from a meteor. The reporter further adds to his dislike by worming his way on to a ship on a "secret mission".

Quaint visual effects collides with a very weird story that has people being referred to as numbers instead of names. One can feel the specter of Orwell hanging over the film with one character referred to as the supreme leader. There is a weird political feel that over whelms the sense of adventure.

Its a trip back in time to a time when schlocky films filled drive ins. While not a bad film this is more a late night curl up on the couch film. Its a film that you need to be in a certain mood to enjoy.

What night is it? On some nights I love it and the sense of nostalgia on others I turn it off ten minutes in. Should you see it? If you're in the mood give a go. 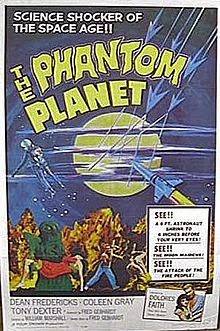 Phantom Planet
More like a TV anthology story stretched to 80 minutes, the Phantom Planet has a space ship encountering a wandering asteroid. Landing on the planet an astronaut finds him self shrunk to the size of the tiny inhabitants.

Amusing in a retro MST3K sort of away his is a so bad its good sort of a film. Its one of those films you kind of look at and wonder what sort of adult actually came up with the plot of the film.

I don't know what else to say, its an amusing time killer, perfect for nights you want a retro drive-in feel on the couch
Posted by Steve Kopian at February 12, 2015