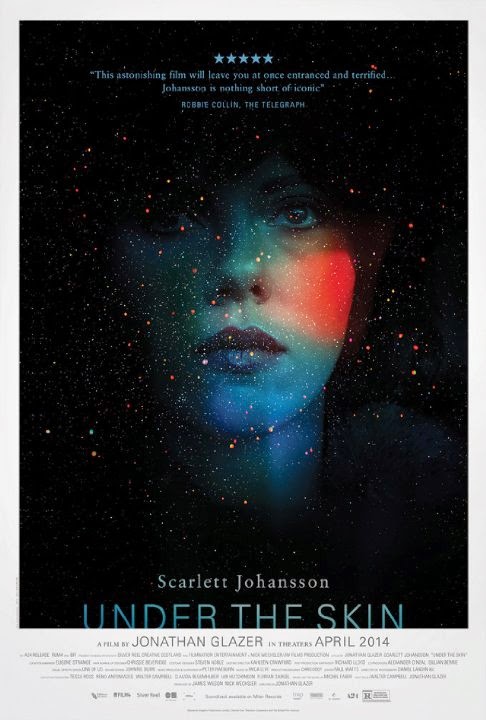 Scarlet Johansson is an alien who uses her feminine wile to collect men for food. Driving around Scotland she goes about her appointed rounds until her curiosity about humanity begins to change her.

Loosely based on the novel by Michel Faber UNDER THE SKIN has won great critical acclaim around the world with it’s largely wordless look oat the human condition as viewed through alien eyes. Going into the film roughly since the film first started making the festival rounds in 2013 it had a great deal of baggage attached to it. Could it live up to the hype?

There is no doubt that there is a great deal of good stuff here but at some point the film kind of runs out of steam and just rambles on to a conclusion.

The early portion of the film where the alien comes to earth is  wonderful. The trippy visuals mixed with the evocative score makes for a series of fantastic sequences that show Scarlet’s world and view of ours in a gripping fashion. We are sucked into the tale and carried along without a single word. The images are wall quality and you’ll want to add them to that large screen TV we all need that just cycles through playing beautiful movie images. And the sequences of Scarlet capturing her prey are truly unlike anything you’ve seen before.

The trouble is that the film’s lyric beauty begins to crack when we get the hidden camera sequences of Scarlet driving around and talking to men on the street. The sequences are jarring because of the raw way they are shot - single person shots instead of carefully composed wide shots, quick hard cuts between Scarlet and the men in reality TV style instead of fluid transitioning.

Additionally the film kind of begins to spin its wheels after a bit as Scarlet begins to become obsessed with a motorbike rider and takes a greater and greater interest in the human condition, letting one victim get away and trying human food. Its moody landscapes and longing looks and ultimately nothing we haven’t seen before. We have been here before any number of times-just think about any story where an observer gets into trouble by getting too close to the thing it is watching-or a society it is interacting with.

For me half of this film is truly great. The form over content stylings of the film carries things along for most of the first half hour and then off and on through the rest of the film. The trouble is once the spell is broken the film doesn’t do anything. It’s not boring, but it’s not as rapturous as it was at the start. While I freely admit that if you see the film in the dark on the big screen it’s going to play better than if you see it on TV in a lighted room, I still don’t see why so many critics have fallen all over themselves about it.

Its good, great in pieces, but its not the best of the year.
Posted by Steve Kopian at February 28, 2015