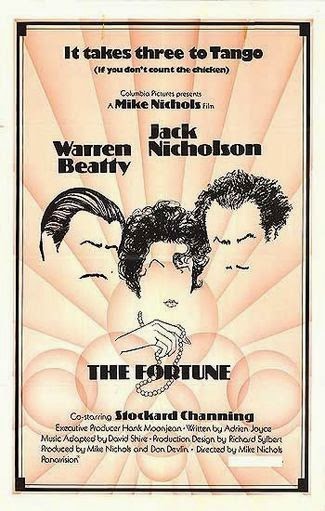 The Fortune is an odd duck film. Despite having been well received by critics, starring Jack Nicholson and Warren Beatty and being directed by Mike Nichols the film is barely acknowledged by anyone. Nicholson will not discuss it because of all the bad things that happened around the time it was made. Most people I know have no clue as to what the film is.

Set in the 1920’s the film has married Warren Beatty wanting to run off with his girlfriend heiress Stockard Channing. However fearing being arrested because of the Mann act he convinces his friend Jack Nicholson to marry her. The trio then move to Los Angeles where the guys set about trying to separate Channing from her fortune.

A slapsticky silly film that I’ve seen any number of times over the last 40 years this is a film that completely and utterly eludes me. While I don’t hate the film, I’ve seen it too many times for a film I hate, I don’t get it. Beatty and Nicholson are such idiots that I can’t understand why Channing would have anything to do with either of them. Is she that dense? Apparently. For me the fact that I don’t get the male female relationships in the film makes the film a head scratcher. What did everyone see in the film to begin with?

To be honest where normally I’ll revisit a film for a festival this one I had no interest in seeing again. For me the film is just sort of there. I’ll watch it if its on , but with cable TV these days and the fact I have so many other films piled up around me the odds of me staying tuned in have grown less and less over the years.

The film plays March 5 at Film Comment Selects and if you’re a fan of Nicholson or Beatty and never seen the film give it a shot. On the other hand if you miss it no big deal.

For tickets and more information go here.
Posted by Steve Kopian at February 19, 2015