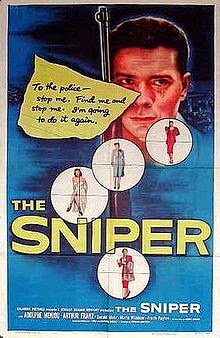 The sniper is a wicked little film that has police men Gerald Mohr and Adolph Menjou trying to track down a sniper who is shooting random women. The sniper is a messed up guy who’s dislike of women has driven him to murder. It’s a tense little thriller/noir that packs a kick.

Shot on location in San Francisco the film gains immeasurably from its you are there feel. One of the reasons I love post war crime films so much is that many of the films went out into the streets with the locations becoming as important, if not more so, to than many of the characters.

If the largely sterling film falls anyway it’s in the portrayal of the snipers psychology and compulsion. What was no doubt deep in 1952 plays now more than a tad silly. Its okay because the rest of the film is so strong, but there are moments where you can’t help but chuckle.

This is a great little film. How do you know? I saw this on Turner Classics and immediately went to Amazon to buy a copy. Track this one down
Posted by Steve Kopian at February 05, 2015