BAMkids Fest was a blast and a half Its official- any doubts I had about the BAMkids Film Fest are gone. I spent Saturday and Sunday there and had a grand old time. I do know that walking in this year my first reaction was "OH WOW" which was followed by "this is so cool." Somewhere about the time I saw Cookie Monster doing the shimmy to the absolute delight of some tykes I knew that I was in a truly magical place. This was so wickedly cool that I really didn't want to go home. I had a while to go be fore my only movie Saturday so I sat down and just watched the kids coming in- they went from "where are we going" to genuine awe at everything that was going on around them which rapidly switched to wide eyed grins and pure joy. Many of the kids squealed with absolute and utter delight. I spent the time just wandering from the various entertainers simply to watch the kids. I had to see the wonder that was in their eyes and feel it radiating from their hearts. I can't tell you what it was like seeing these kids being some where past happy. Could it really be possible to feel such absolute delight? Apparently you could and everyone at BAM was providing it to everyone there. After my movie I wandered around the festival some more,I went sup to the cafe and watched the kids eating and taking part in various technology stations, one of which was helping to make a group animated film. It was very cool. After while I wandered out and headed out to my afternoon appointment- knowing I'd be back the next day.

On Sunday I had two short film collections to see. Arriving close to show time I watched Cookie Monster interact with some kids and some some magic being done. I then ducked in to the movies. Inside I was pleasantly surprised to find The Amazing Max doing tricks before the screening. It was sheer delight and Max got everyone involved either by pulling kids on stage or by yelling screaming. It was wickedly cool. Dashing out of the screening I ran downstairs and into the lobby to see what was going on. I couldn't just go into the other screening without seeing what was happening in the lobby...stilt walkers and Cookie were holding court. It was way cool- but I couldn't stay so I went back into the movies. Again Max was doing magic and juggling. It was a great fun especially since Max was juggling over the body of one of the audience members- promising that he wouldn't drop anything.

After the movies I headed out. I was aiming to have lunch with the Brooklyn contingent of Unseen. What can I say- the people at BAM nailed it this year. They managed to make it a treat for everyone, kids and adults alike.

The best thing I can say is that the festival is no longer The New York International Children's Film Festival little brother. It now stands on it's own. Heck, it's officially one upped NYICFF T-shirt toss with magic before hand.

I know I'm now looking forward to next year.

Might I suggest you putting it on your calendar for next year? I mean this is one party you don't want to miss.

----
I suppose I should give you quick word on the films I saw. 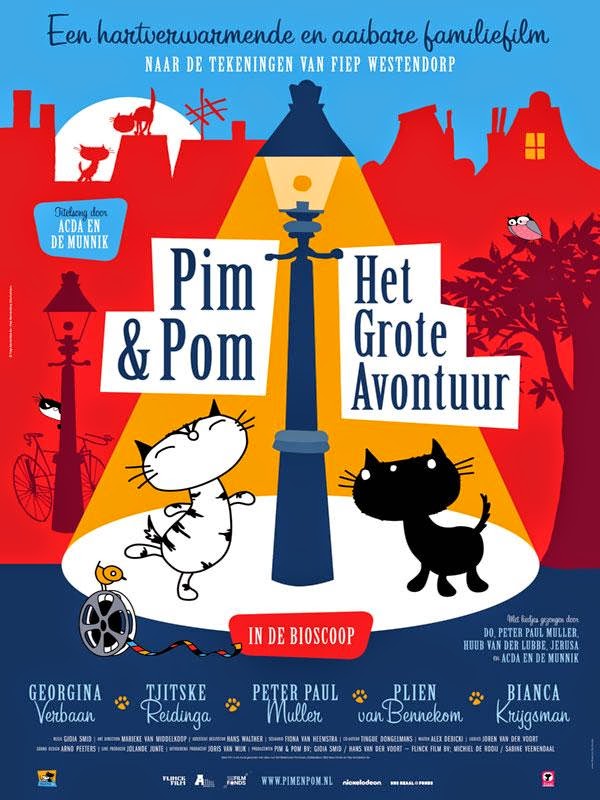 PIM AND POM:THE GREAT ADVENTURE follows Pim and Pom, two cats who run away to avod getting kidnapped by their owners nieces. Trying to find their way home they fall  in with a bunch of alley cats and have some adventures. Its a neat little film that looks like an illustrated picture book come to life. Watching the film with an audience full of kids was sheer delight as I could hear them reacting to the film in all the right ways. Truthfully it was great to hear the kids shouting at the cats in order to help them.

If I can get a DVD I'm going to watch it again with my niece. 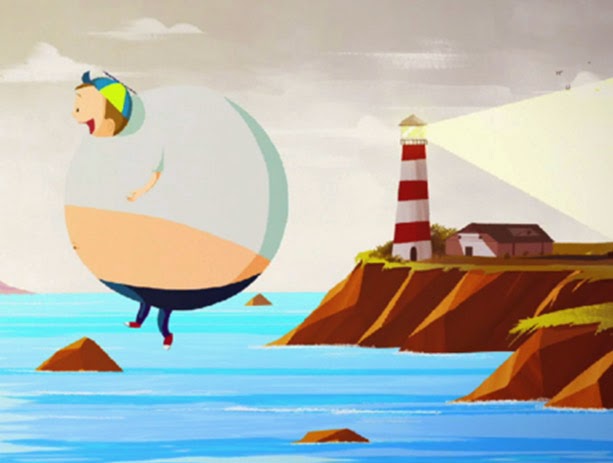 COUNTING STARS was a collection of 14 shorts aimed at the very young set. With the exception of  JINGLE AND BELL'S CHRISTMAS STAR, which was a Christmas TV special, all of the shorts were a couple of minutes long. I'm not going to talk about all of the films but I did want to mention a couple.

HELIUM HARVEY (see the picture) is a delightful film about a kid who swallows a ballon and then floats around the world.

STORYBOTS: ABC JAMBOREE had the whole audience singing the alphabet song- no really. It was really cool to experience.

BEWITCHED BARRY has Barry and his dog put on a magic show for a disinterested audience member. It was very funny. 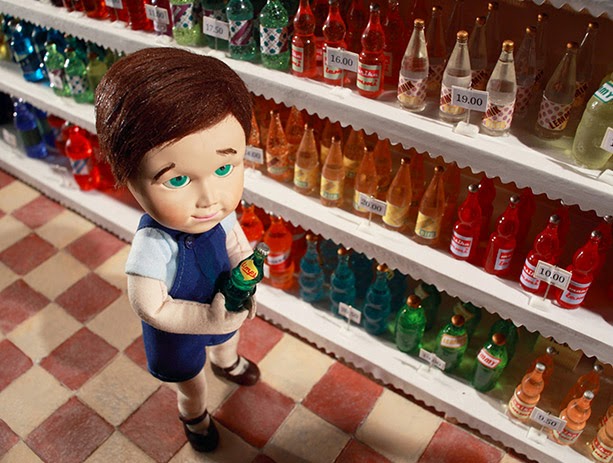 FANTASTIC JOURNEYS was a collection of seven shorts, both live action and animation. Some of the films were kind of almost great head scratchers while others were real delights.

WOMBO concerns a potato like alien who crashes on earth and has to rewind his space ship to get home. Its a lot of fun. You should track this one down. (and the out takes are a blast)

MY HERO is an awkwardly acted story about a boy who just wants to spend time with his dad. Its good but the performances are off.

WHILE YOU WEREN'T LOOKING- a daredevil girl wo is always stopped by her mom meets her match in a supermarket. Its amusing

100 MILES almost great of a boy and his family going to visit his great grandfather who loves trains. It almost comes together the way it should.

LITTLE LOST MOON has a boy finding the moon on the ground and his efforts to get it back up in the sky. Its okay.

LEMONADE TALE (see above) has a little boy getting sucked into the world that's inside a bottle of lemon soda. Weird doesn't begin to describe it- cool, but strange.

LITTLE MATRYSHKA was the best of the bunch. It concerns a bunch of toys and the wandering nature of the smallest of a group of nesting dolls. This is beautifully animated and an absolute joy.
---
Before I go I need to make a request for next year. Would it possible for the programmers to do one thing when they program the short collections- could they have them run longer than 40 or 50 minutes. Yes the films were good but I heard a couple of parents go "that's it?" when they ended.
---
If you want to see a few more pictures from the Festival check out our Tumblr page .
Posted by Steve Kopian at February 09, 2015