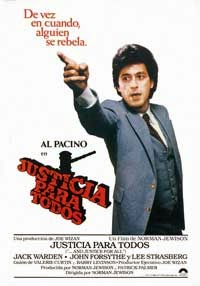 On some level I don’t think Al Pacino ever was a good or as iconic as he was in the Godfather films. Somehow I think his whole career was based on his being in those movie. I’m not saying that he’s not been god since then, rather I think the godlike way that some people look at him comes from those films and nowhere else cinematically.

I think the point where I realized that Pacino wasn’t quite the godlike actor people have made him out to be was And Justice For All. Somewhere in the film I realized Pacino was just this regular guy and not something more.

Of course you shouldn’t infer that I don’t like the film, I do, I love the film, especially it’s ending which makes me yelp every time.

In And Justice Pacino plays a New York Lawyer trying to navigate his way through the court system. Things begin to spiral out of control for him when in rapid succession his partner goes nuts and he is strong armed to take the case of judge accused of beating up a woman. Pacino despises the judge for good reason but since Pacino has such a rep as straight arrow that it will help the judges case if Pacino takes the case. Besides the judge is completely innocent, right?

There is no getting around it the film is nonsense. So much goes on that would get an attorney or judge disbarred its not even funny. On top of that the plot is pure potboiler. It’s the sort of thing that feels more at home on TV then on a big screen. This was silly even 35 years ago.

Filled with great character actors (Jack Warden, John Forsythe, Jeffery Tambor , Lee Strasberg…) the film is kind of yearbook for acting greats. You buy the film’s nonsense simply because you buy the cast. The cast is so good that by the time the film ends odds are you’ll be like me and yelping with delight at the the conclusion.

Its not a great film. It’s a good film, but as these things go, hving a good film to watch, no matter how unrealistic and silly it is is good for the soul.
Posted by Steve Kopian at February 23, 2015