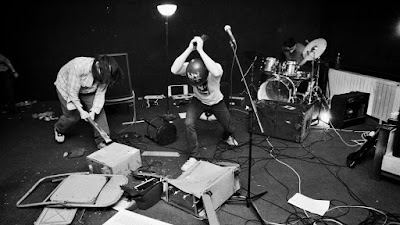 Bamseom Pirates Seoul Inferno is about the duo Bamseom Pirates, a Korean black metal/performance art/anarchistic band that loves to tweak everyone. Playing sets in small venues- often abandoned buildings the group attracts what appears to be exclusively young men who jump around as if in a mosh pit. The group not only play music they also make videos and art that pokes a pointed stick into the eye of Korean society. In the film we watch as they go through abandon building make music and piss off the establishment.

This is a good but DIY documentary about art on the fringe. It’s a good portrait of a couple of guys who want to change the world and say their piece.

Despite my liking the film (or admiring it) the film has two problems which kind of keep me from wholeheartedly recommending it.

First the film is wildly overlong. Running two hours the film really doesn’t need to be this long since a chunk of this film just seems to be the guys rambling about.

The other problem is the film is very intentionally jagged. The director wants to maintain the low tech esthetic of the band with the result that chunks of this look like a home movie. Additionally and more annoying is the sound is not mixed. It’s an intentional choice the film makes because it wants to both give an approximation of what it’s like to see them live and to give physical representation of the distortion in Korean society. To me this resulted in a massive headache starting about a half an hour into the film.

Full disclosure, the only time my head rang like it did after I saw Bamseom Pirates Seoul Inferno was when I saw Bob Dylan at the United Palace Theater in Manhattan.  He played at a volume level of 50 and extremely distorted.  My head rang like a bell for days afterward. While my viewing of Bamseom Pirates Seoul Inferno was nowhere near as loud, it was on a laptop from its small speakers on low volume, the distortion was still there and it gave me a wicked headache and my head rang for hours afterward.

Bamseom Pirates Seoul Inferno is worth trying if it interests you, but bring ear plugs
Posted by Steve Kopian at July 11, 2017