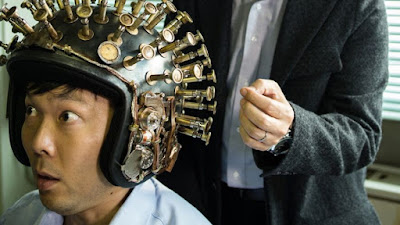 If I described Sabu's HAPPINESS as the bastard child of MONDAY and MISS ZOMBIE with the silences of BLESSING BELL thrown in almost none of you is going to understand what I'm talking about. I would use other descriptions but the only things I can compare HAPPINESS to is other work by the film's director Sabu. Despite it's happy start, HAPPINESS is a sad painful film that will infect your soul and make you wonder about the good and bad in our lives.

The film concerns a man who arrives in a dying town carrying a case. In the case is a helmet that can be used to make you remember your happiest memory. He is more than willing to use it on the various towns folk in order to make them come back to life. However making the town happy isn't why he's there. He has a purpose that is not so cheerful...

I doubt that anyone other than Sabu could have made this film. A meditative throw back to his early philosophical  explorations such as DRIVE, MONDAY, or BLESSING BELL this is not so much a feature film as a cinematic discussion about the best and worst moments in or lives. As one character says the best and worst memories are very close. HAPPINESS explores that as the joyous first half hour turns on a dime to something darker.

I will not say what happens or why but I will say that it will break your heart and have you thinking about life's moments and other things for a long time afterward. We really see the good in the bad and vice versa. A good time on I'm still trying to figure this out.

Beautiful and told with a minimum of dialog Sabu lets his images speak, He makes us feel what he wants by careful combinations of shots. He is  also blessed with actors who are good enough not to need words to let us know what they are thinking. This a film where it's all in the body language and in the eyes of the characters. We buy everything that happens, even the seeming left turns because we accept the characters.

I love the film but I know that not everyone is going to like this. The turn toward the heavy is going to bother some, as is the violence.   There is a reason why Sabu's films are nigh impossible to see in the United States, they are not your typical art or genre films. No one knows what to do with or how to market his films.  I've had a giddy conversation with a writer from Japan who loves Sabu and a heated argument with another Japanese writer who despises him, clearly passions run high.

From my stand point HAPPINESS is a must see. A heady challenging film that is unlike any other film anywhere other than from Sabu (and that will make more sense once you see all his work). If you don't want to be challenged and made to think and feel stay away. If you are ready to see something special go....