Memoirs of a Murderer Japan Cuts 2017 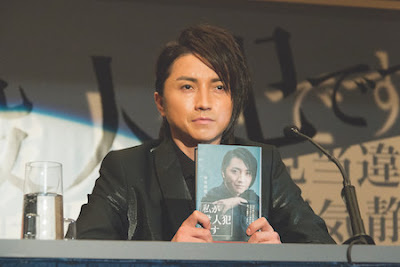 22 years after a a series of unsolved murders and 7 years after the statue of limitations ran out the murderer writes a book telling all...

Remake of the Korean film Confessions of Murder is a really good little thriller.  Taking the  plot of the original film and amping it up this  deftly directed film manipulates image size and quality to create a real sense of being something all it's own. Jetting along at a good clip for  two acts the film made me completely forget the first film.   Its a hell of a ride.

The problem with the film is that in striving to make the film different from what went before they made it overly complicated. As the film spins to its third act conclusion and it all has to be summed up it kind of gets away from  director Yu Irie. Things get messy. (I can't say what lest I give things away)  Its not fatal but you do realize things are not going to end as neatly as it should.

However despite my reservations I'm really looking forward to seeing the film again since I want to see it for what it is on its own terms and not as a copy of an earlier film, since ultimately this is a stand alone kick ass film.