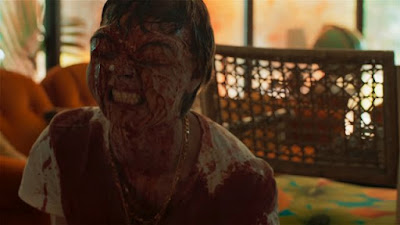 Jumanji for the gore set GAME OF DEATH has a bunch of obnoxious teens hanging out at on of their family homes. They discover a retro board game called Game of Death and decide to play. However once the game starts they are shocked that they now have to kill someone before the  timer runs out or else the game will kill someone and then reset an a new victim has to be found.

Starting as a web series from La Guerrilla (Montreal), Rockzeline (Paris) and Blackpills (Paris)GAME OF DEATH was edited together into a feature film. The result is a barely feature length nihilistic thrill ride that is going to thrill those who love great practical effects and annoy the piss of anyone looking for likeable characters or logic and reasoning.

As spectacular as the film is visually and viscerally the film is devoid of  anything but blood. You really can't like a film that really hates it's characters to the extent that it makes all of them either horrible or so annoying we want to kill them ourselves. I hated everyone and anyone I might have liked I really pitied. This is possibly the most vile cast of characters I've seen in a film in years (and that includes several docs about child molesters)

Worse the film has no logic to it since the game is supposed to be about the last man standing yet it requires that 3 times the number of players die. I won't even get into the most basic question of why would anyone have the game around if they knew what it was.

Clearly we are not suppose to not care about plot or characters only the violence. While I can almost say that's enough, the lack of characters make this film not something that I would ever want to see a second time.

For fans of practical visual effects and sociopaths only, GAME OF DEATH is not recommended for most audiences when it plays again on July 29 at Fantasia