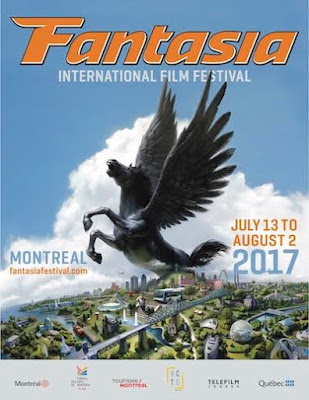 One of the very best film festivals in the world Fantasia opens Thursday and the universe is so much better for it.

This is the 21st gathering of the best genre films from across the globe and it is something that I have looked forward to every year since back in 2013 when Ted Geoghegan reached out to me to ask me if I was interested in covering the festival. I’ve been hooked on the festival’s cinematic crack ever since.

As with every year the festival is full of all sorts of great films. If you need proof consider that the fest has around 45 films that we’ve previously reviewed (see below) and based on what we’ve seen from this year the fun is continuing.

I don’t know where to begin recommending films. I know that one of the biggest must see for myself and most of the people I know is MOHAWK. The film is the latest from the aforementioned Ted Geoghegan. While I know Ted, as well as screenwriter Grady Hendrix, the desire to see the film has nothing to do with knowing them, rather it has to do with the fact that he’s a kick ass filmmaker- as anyone who saw his WE ARE STILL HERE can attest.

Other than Ted’s film the films I most want to see would be 78/52, ANOTHER WOLF COP, BUSHWICK, CLAYMATION HORROR, GEEK GIRLS,  GENOCIDAL ORGAN, JAIL BREAK, JO JO'S BIZARRE ADVENTURE, WU KONG,  YOU ONLY LIVE ONCE.

There would be more but we’ve already reviewed a bunch which played at other festivals such as New York Asian, Japan Cuts and Tribeca. I’ve listed them below and linked to them where appropriate.

Actually you’ll notice that there are three lists below:

The first are links to everything that we’ve reviewed up to now that I can link to.

The second is a list of films that I’ve seen that I’m embargoed from reviewing. These are films that have yet to play at NYAFF or Japan Cuts so I can’t review them without violating their rules.(I will update once the reviews go live)

The third list is films I’ve reviewed but I appear to have lost the reviews. I know I’ve written them up- I just don’t know where they are- I’ll be posting them as soon as I find them.

Okay I’ve done what I’ve had to – now it’s up to go buy tickets (go here) and go to the festival. Just remember to check back as the reviews go live.

(And I strongly recommend JUNK HEAD and SAVAGE DOG)

FILMS WHOSE COVERAGE WE'RE EMBARGOED FROM REVIEWING (because of other festivals)
MUMON I am seeing this Thursday night as part of Japan Cuts so check back for a report.
MOLE SONG Sequel to Takashi Miike's film from a couple years back is more of the same If you liked that one see this. A review comes Tuesday for NYAFF.
VAMPIRE CLEAN UP Glorious throw back to Hong Kong Horror comedies is a must see. A review this week for NYAFF
VILLAINESS- word of mouth is strong- so strong that a good chunk of the NYC film world will be at the screening Sunday night at NYAFF
TOKYO NIGHT SKY…- Solid Drama that I'll be reviewing close it it's Japan Cuts screening.

Pick something and go see it- for tickets and more information go here
Posted by Steve Kopian at July 10, 2017

Email ThisBlogThis!Share to TwitterShare to FacebookShare to Pinterest
Labels: Fantasia 2017