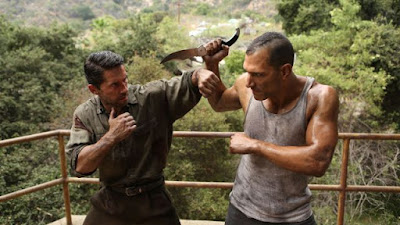 Scott Adkins is Martin Tillman in what may very well (oh please yes) become a series. This is a slam bang action film of the sort that Jean Claude Van Damme would have made 25 or 30 years ago and turned the box office into a mint as a result.

Adkins's Tillman is stuck in a prison in Indochina in 1959. It is after the French have left and before the Americans have taken over.  He is forced to fight in matches set up by the warden. He wins his freedom and takes a job working for the father of  young woman he has befriended. When he beats up a champion being brought into fight in the warden's underground tournament he is forced back into the ring to keep his new family save.

Wonderful B action film of the sort that made Chuck Norris and JCVD mega stars SAVAGE DOG is just good violent fun. Like in those earlier films the plot is kept to a minimum as is character development, and while that is often a disaster, here i works wonders since we are given enough to make ups like the good guys, hate the bad guys and follow along without any leaps in logic. Adkins and the other actors are allowed to create meaningful characters via force of personality and it works brilliantly.  Its all good clean fun where we can , boo and his and cheer in all the right spots.

While most of the action sequence involve fist fights, things get more and more violent as things go on. We are never bored and things never drag. This is one of the most beautifully paced action films of the year.

Actually this is one of the best action films of the year. A glorious throwback piece of nostalgia that is so good you'll want more when it ends. WHen the film ended All I could think was to call everyone I know and get them to make plans to see it.

One of my favorite films at Fantasia.
Posted by Steve Kopian at July 15, 2017