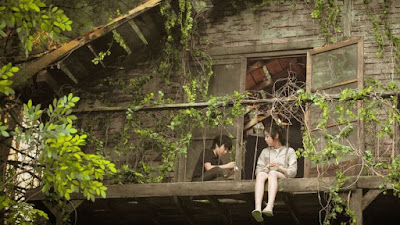 VANISHING TIME:A BOY WHO RETURNED
Bitter sweet tale of a young girl who is caught up in the middle of a frenzy when she goes off with three friends and find a strange egg in a cave. When the the girl returns to the cave for something she left she comes out to find her friends gone. As everyone tries to find the boys a twenty something year old man appears claiming to be one of the missing boys.

Grimm's fairy tale for the modern age is full of earned sadness. The loss of friends, the passage of time, and belief are beautifully explored in this moving fantasy. While this may not play well with those who want light and fluffy, this is probably in the ballpark of BRIDGE OF TERIBITHEA but not as tragic through equally sad. 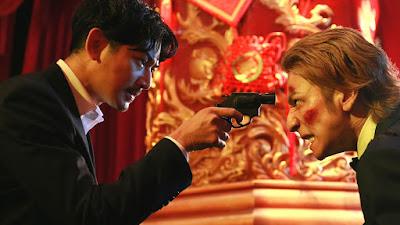 Here Reiji continues his undercover attack on the yakuza by winning even more of their trust and ends up being sent to Hong Kong to fight the Chinese gangs.

The film gag a minute, nothing is sacred or serious assault on our sense is best in the numerous comic set pieces that fill the  film. I say this because the plot is largely overly complicated and the sheer volume of characters make this a bit hard to follow. I saw the first film when it played Japan Cuts four years ago but I haven't seen it since so many of the details as to characters are gone from memory. The rapid fire recap at the start was little help- but it didn't matter this is Miike's insanity in overdrive so I knew just to buckle up and let it wash over me.

If you like sheer comic insanity, especially of the Miike variety, this is highly recommended 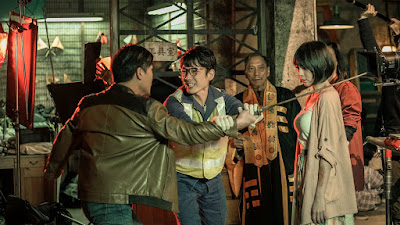 VAMPIRE CLEANUP DEPARTMENT
Charming throw back to old school Hong Kong horror comedies has a young man join his family business running the secret Vampire Clean Up Department which is tasked with making sure vampires don't run amok in the city.  Their primary task is trying to stop a big bad vampire who is causing all sorts of problems in the city.

This is the sort of film we might have seen in the 80's or 90's  when the hopping vampire films or Chinese Ghost Story series were at their height of popularity. The film is a beautiful mix of laughs and scares and is exactly the sort of thing that's perfect with a tub of popcorn an a beverage of choice.

While not perfect (most similar films ever were) it is grandly entertaining.

My only question is why is this running in a late night slot when I can't take some kids I know who love monsters? 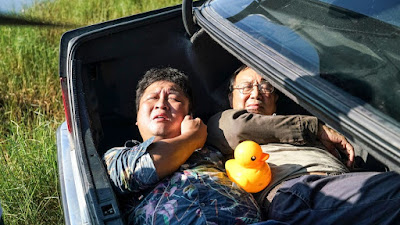 GODSPEED
Billed as a comedic buddy film, GODSPEED is something else entirely. While there is humor, the film is really more a drama about life as a guy who delivers drugs takes a cab to the delivery and "back". Getting in what could only be described as the wrong cab he and its older driver bond on the trip.

One of the few films of this year's NYAFF Godspeed grabbed me at the start  and just kept me entranced. The 42nd film into the festival it's the first of the films that I watched for the festival where it didn't seem by the numbers don't get me wrong- there are films I loved, and films that are better- bt this was the first one that took me on a ride I never expected.

Flawed imperfect yet always entirely compelling this is the one film I probably will carry from the festival for years to come.  A must see.

Mondocurry's take can be found here
Posted by Steve Kopian at July 11, 2017