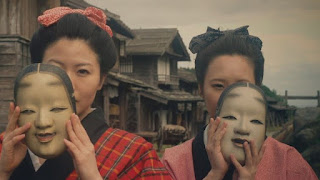 Awesome visual effects and animated sequences lift up the tale of a monk who has to deal with a sexual attraction that causes women to run off with him. Driven to distraction he heads off into the wilderness in the hope of getting things under control. It doesn't go as expected.

Not what you expect film, this is not a sex film, ends up being a truly haunted by it thanks to its serious tone, unexpected twists and some killer visual effects and animated sequences. The effects/animation are spectacular  and add the kicker to the story.

JB's take on the film is more to the point and his review can be found here
Posted by Steve Kopian at July 08, 2017