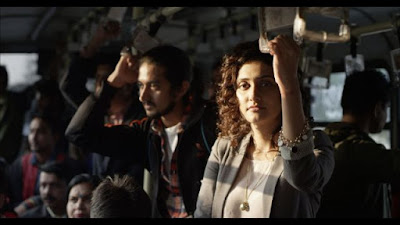 This ugly family thriller will leave you feeling uneasy and disturbed with the level of vile human behavior on display.

Preet returns home from architectural school in America. The adopted daughter of a wealthy real estate family in India she was brought into the family because they had been told a daughter would bring luck. Because of her place in the family her older brother Nikki despises her. Its a feeling that deepens when their father wants to give Preet a choice piece of land for a condo project. After a sure thing bet goes horribly wrong Nikki decides to take steps to make everything right in his world, not realizing the nightmare will only get worse.

Gut punch of a film will leave your mouth hanging open as bad things pile up and veneers are stripped away leaving you with very few people you can like. It seems in this world everyone other than Preet and her mother are terrible people and we wonder how we can get out of this terrible place. Apparently the only way out is death. I twisted in my seat with each revelation.

This beautiful  to look at film has some stunning set pieces an small moments. There is this one moment in a club when a fight starts and continues on for a bit as no one notices because on some level the beating looks like dancing. Why hadn't I seen anything like that before? There are others joys, such as the denouncement which had me gasping, but I'll leave you to discover them.

GURGAON is a wonderful little poisoned confection that is recommended when it plays today at Fantasia
Posted by Steve Kopian at July 15, 2017