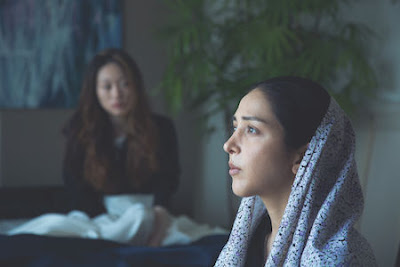 Naima is an art student from Iran. She meets Kei in a local cafe. As their friendship grows, Kei's on again off again girlfriend grows jealous.

Slow burn drama is in some ways less a romance than an examination of people simply trying to find out where they are going or where they belong. It is a film of uncommon weight where we feel that the actresses are deeply invested in their characters.

While I liked the film a great deal I find I have very little to say about it. This is not because it isn't a good film, it is one of the best films at Japan Cuts 2017, rather it was more that stayed with me more as a felling rather than as something I can explain. I love the film and recommend if you want to see a solid and deeply moving drama.