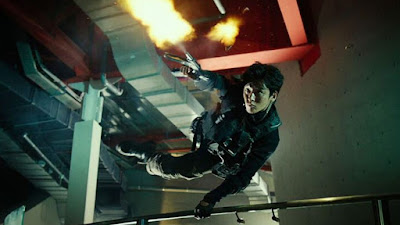 One of the best films at both of this year's NYAFF and Fantasia FABRICATED CITY is a rip roaring action film of the highest order.

The film is the story of a video gamer who is suddenly arrest for the rape and murder of a high school girl. Framed, convicted and thrown into jail he has to find a way to escape and then find the real person who did it and the reason for his being set up.

FABRICATED CITY is full of an unending chain of white knuckle set pieces. While normally the plot in a film like this could run the danger of being overwhelmed by the motion, that doesn't happen here thanks to a great cast who create and sell you on their characters. We believe because we not only like the action but we love the characters.

Adding a level to the film is the wicked social commentary and satire that runs through the film. Questions of violence,the government, corruption, patriarchy, and the place of women run through the film. One of the gang helping our hero is a woman who is light years a head of all the men, that is not a typical place for a woman to be. Its a heady mix of themes on display,most of which you'd mix unless you paused for a second to see them.

Mostly you'll remember the killer set pieces. From the opening, not to be topped mega assault in the video game on through the fights, chases and armed standoffs FABRICATED CITY is one of the best action films in several years. a beautiful blending of story character and motion this is one film you can't afford to miss.

FABRICATED CITY has played NYAFF and will play the 29th at Fantasia. FOr tickets and more information go here
Posted by Steve Kopian at July 25, 2017