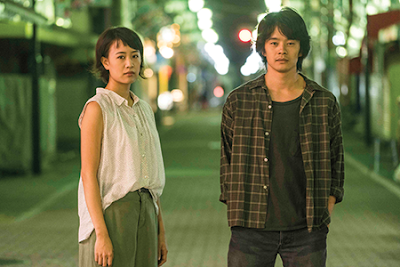 Disaffected nurse who moonlights as a bartender and has an internal running commentary on the world meets an alienated talkative young man with one eye. The pair circle each other trying to determine if the other is the one.

Visually impressive film is at times a kind of cinematic tone poem that forces you to ponder life. This is one of the rare films that marries sound and image so well that it say volumes about existence with out needing to use any dialog. I like the visuals  so much that I found much of the dialog intrusive. What is said  is a little too flowery or a little too awkward to allow us to connect with the film emotionally, even at the end.

Despite my reservations I really liked  TOKYO NIGHT SKY... a great deal. Imperfections or no it gets lots of points for not being like every other film out there.
Posted by Steve Kopian at July 12, 2017