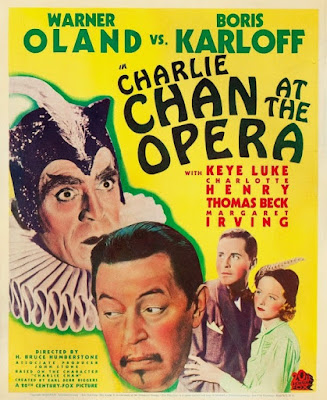 Charlie Chan at the Opera was one of the later Fox productions of a Charlie Chan story. Made at a time when the series was worth of big budgets and big stars the film is a grand mystery of the sort they don't make any more.

The film has Chan getting involved with the murders happening in and around an opera house. It seems that a crazed composer (Boris Karloff) has escaped from the asylum and plans to kill the man who wronged him.

Its a wonderful production that is so lavish that the studio actually has a mini opera written just for the production. It looks and feels impressive and will surprise you if you've only seen the public domain ones not the ones that Fox produced.

As a Chan film, it's one of the best. There is a genuine mystery here and the characters while stock still manage to grab you.To be certain the there had been a lot of films in the series -this is the thirteenth of forty four, but the film still had a lot of life in it and it wouldn't really begin to become mechanical until later into Sidney Toler's run at Monogram. Fox cared about the films and made sure that they were quality products because they were a cash cow for the studio.

The shame of the Chan films is that they are viewed as being un-PC. While that may be true on some level it has to be remembered that Chan is always the smartest guy in the room. It is a something that the early entries in the series made clear. By now the series was set so they didn't need to emphasize it. (So as a result the portrayal when stripped of the previous film always looked questionable)

Regardless this is a great film and fun mystery

The film plays July 30 as part of the Sherlock Holmes vs Charlie Chan screening at Fantasia. For tickets and more info go here
Posted by Steve Kopian at July 27, 2017