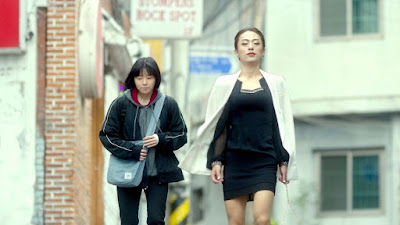 This is not so much a film about the transgendered Jane of the title but a runaway teen named Sohyun  who tells us about her life in which Jane may or may not be part of.

The film takes the form of a letter that Sohyun is writing to someone telling of her life. She speaks of how she tried to commit suicide but was saved by Jane who then brings her home where she joins a new family with other kids.  When Jane dies Sohyun is out on the street again...

Not to worry that is only about a third of the way into the film there is plenty more to go.

An odd mix of fantasy and reality we are at the whim of an untrustworthy narrator who may or may not (probably not) be telling the truth. This is a moody dream like film that doesn't really work. To be certain the film has a unique feel to it thanks to some moody cinematography and a wonderful electronic score, but the narrative and thematic elements are all over the place.

This all over nature is partly the result of not being able to trust our narrator. I don't mind unreliable narrators but you need to get a sense that somewhere in what we are being told is something they believe in, here Soyun is simply spinning a fiction to make her world better but she knows bits aren't real. Much of this is a wish fulfilment of a sort. I know that if there had been something to grab on to so the narrative could have pulled me through to the end I would have liked it more.

While I know that many people have loved this film, I also know many people, myself included haven't clicked with it. If the subject interests you give it a shot, but I suspect that you'll like the bits more than the whole.
Posted by Steve Kopian at July 13, 2017