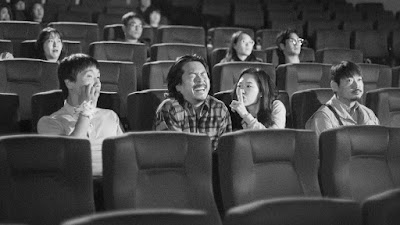 Odd ball dream like film about a woman who runs a bar, her catatonic father and her three regular customers. Full of surreal moments, touching passages and witty lines the film drifts across the screen very much like a dream,

While I like the film and it's quirkiness I am very much of the opinion that there was much in the film I didn't get which was something reinforced by reading on the film. According to what I've read the film is full of cinema and cultural references (the three customers are all inde directors) that went right over my head. I really like the film but I think the more you know about what its referencing the better it will play.

Mondocurry's take can be found here
Posted by Steve Kopian at July 12, 2017