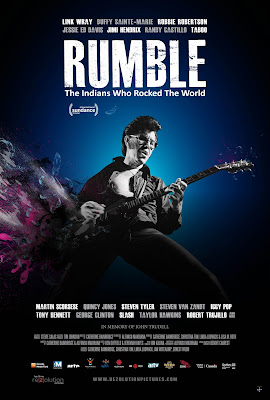 I covered RUMBLE when it played at Sundance. Since the film hits theaters starting Wednesday I'm reposting the review

Rough, raw imperfect and so full of life it changes the way you see the world RUMBLE-INDIANS WHO ROCKED THE WORLD is freaking awesome. Its one of those great documentaries that grabs you by the gonads and drags you along. It will force you to rethink how you see music history.

The film is nominally a look at the place of native Americans in the history of rock and roll but in reality this is a history of all popular music. Beginning with Link Wray, who's RUMBLE gives the film its title, the film then spreads out to show how Native Americans changed all of popular music. And I do mean all since we get a Frank Sinatra anecdote and and Tony Bennett on camera talking about some of the people being discussed made them who they are. Of course the film highlights a large number of people with Native American blood in them including Mildred Bailey, Charlie Patton, side men Jesse Ed Davis, Randy Castillo and of course the big names of Jimi Hendrix and Robbie Robertson. And it ties it all up with a glorious selection of talking heads including Steven Van Zandt, Taj Mahal, Buddy Guy, Robertson, Martin Scorsese, Tony Bennett...and the list goes on.

If that wasn't enough the film is full of video and audio recordings of many of the legends discussed. this is important for two reasons, first they are great pieces of music, but more importantly they reveal how the once shunned upon rhythms and vocal patterns were repurposed as rock and other standards. It's something that is plain as day once it's pointed out- but odds are you never thought to listen to it.

Wow and then some.

I have no rational thoughts concerning this film. RUMBLE is the the equivalent to walking into a juke joint and seeing someone unexpected blow you away. I have no words to describe what a major rewrite of how I view music this just caused. I have only emotions and lots of "Oh Wows". which I kept mumbling to the annoyance of the people around me.

If I must say something bad about the film it's that there is simply too much to the story and while what is here is top of the line, this could have been a bit longer simply because it's clear we're only getting part of the story.

No idea if it's one of the best films of the year but it's damn certain it's one of my favorites.

Do yourself a favor see it in a theater where the big picture and big sound will over whelm and the colorful language won't be censored.