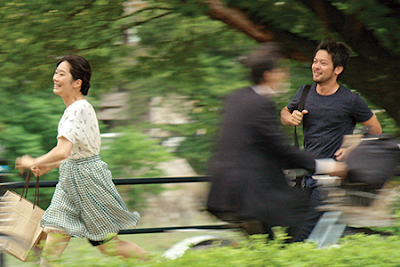 Jean-Gabriel Périot's film has a long time Japanese ex-pat filmmaker returning to Japan to make a film on the 70th anniversary of the Hiroshima bombing. After being shaken by the testimony of a survivor (the first quarter of the film is her simply telling her story) the filmmaker goes for a walk in the memorial ark where he falls into a conversation with a young woman. The pair travel to the coast and to the filmmakers home.

I'm really mixed on this film. While  enjoyable on a most basic level the film doesn't really do anything beyond that. The testimony that opens the film is moving to be certain, but the remaining hour of the film is more polemic than drama. Its the two people discussing life in a manner that never feels real. It plays out as any similar films do but without the usual romance (say the BEFORE films).

I suspect the real problem is that the film never feels real from the instant it starts. How could a man making a film on the bombing seem to be so clueless about it. His reaction to the testimony seems to be as if he were a man from Mars hearing the stories for the first time. One would think he would know something about it. He reacts so that he can act as an audience surrogate, except odds are the audience is going to be well aware of the story. What follows from there is a conversation that while pleasant and enjoyable feels constructed. Periot is clearly steering us toward something with a firm hand. Sure we don't mind being lead but at the same time we know something is coming...

My one reaction when it was done was, "well that was well done but kind of pointless...doesn't he realize we've been here before?" Apparently not. And it's not bad I just wanted more from the film.(Though admittedly the first 20 minutes is so riveting its almost impossible to top)

Worth a look if you are so inclined.
Email Post
Labels: drama japan japan cuts 2017 war