NYAFF Capsules:Soul on a String and Split 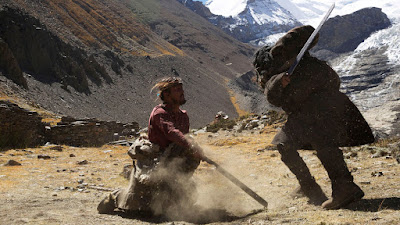 SOUL ON A STRING
Either you click with this odd, mystical meta film which unspools at it's own pace or you will fall asleep. Full of grand vistas and gorgeously arranged sequences the film tells the story of a man who finds a mystical jewel in the mouth of a deer. He then heads off to bring the jewel to a mystical land but other people want it as well.

Not so much action packed as a slow contemplative trip SOUL ON A STRING is very much about something.  This a film that is trying to teach us something and it is going to do so in it's own way. I'm not entirely sure that it works since by the half  hour mark I was fighting to stay awake. Things only go worse in the later art of the film where the film become temporally unstuck and gets meta in it's plotting.

While not a bad film this is not a film for most audiences who will not warm to it's rhythms. 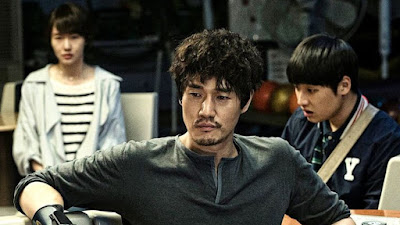 The film is the story of a once promising professional bowler for whom anything was possible. Sidelined after an leg injury he s reduced to making money in back alley games.  Just as the need to make money to get out of a crushing debt arrives he meets a young man with autism who can throw strikes at will.

Odd mix of Hollywood feel good sports film and gritty Korean thriller SPLIT is a really good movie that would be a perfect strike (sorry) if the two styles meshed better, particularly  had the film not switched back and forth between styles, especially in the final third as the darkness closes in (to a degree) and things feel artificial as a result.

Reservations aside this is a really good sports film and recommended.
Posted by Steve Kopian at July 08, 2017