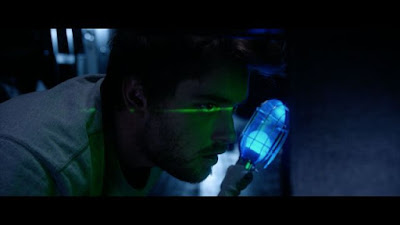 Graham Skipper's SEQUENCE BREAK is a throwback to the low budget science fiction thrillers of the 1980's and early 1990's. Its such a good throwback that other than the odd moment or reference you might have a hard time placing when it was made.

Oz is told by his boss that he is going to have close his business. There simply isn't enough money in arcade games any more. Given the day off Oz goes to a bar and meets a lovely young girl. However a crazy man seems to be lurking in the  shop at night and weird game in the corner just maybe a portal to another dimension.

Practical effects and a moody synth score herald the arrival of a neat little film. A solid homage to films long gone SEQUENCE BREAK is the sort of film no one makes any more. This is the sort of film that would have played for "one week only" in a multiplex 3 decades ago when you didn't have to be a mega Hollywood blockbuster to attract an audience. Its a film that had it been made a couple of decades back would now be considered a cult classic and probably in line for a big budget remake. And all honesty the film is good enough that if things fall right in a  couple of years it just maybe that cult classic.

Beautifully put together to mirror those long ago films that are now in the hearts of so many of us , SEQUENCE BREAK also has some of the problems of those films as well with a a pace that is a tad too slow even though it only runs about 80 minute. Fortunately the pace creates mood rather than boredom and the result is a nifty little throw back thriller that is recommend when it plays Fantasia.

For tickets to today's or tomorrow screening go here.
Posted by Steve Kopian at July 18, 2017