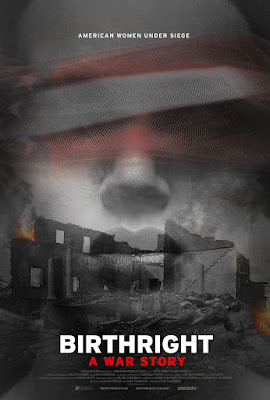 BIRTHRIGHT is a look at the fall out from the war being raged by the far right and the right to life groups on abortion rights. As a result of the groups' insistence on ending abortions they are causing many women to have their lives put in danger when their health or pregnancies go bad. Additionally the zealous prosecution of some women who have chosen to have abortions, or been forced into having them because of health concerns has broken up families and made criminals out of women who should not be in jail.

The film begins with the story of a woman whose life was put into danger when her water broke after 22 weeks and 1 day. He body would not retain water and the chance of a giving birth was only 10% with only a 2% chance the baby would be remotely healthy. Essentially refused an abortion she ended up nearly dying when an infection nearly killed her. From there the film spins out giving a history of abortion rights and how the legal battles surrounding it are shaping our lives.

On many levels this is a very good look at the unexpected results of the war over abortion. It is a film that gives the battles a very human face and shows very clearly the collateral damage of the knee jerk reaction against abortion.  As the film makes clear there is not a hell of a lot of thinking past the "abortion is bad. PERIOD" attitude by the right to life contingent. The film also deftly explains how many of the politicians are warping the fight for their own ends.

Unfortunately BIRTHRIGHT has two things going against it. The first, which has nothing to do with the film itself, is that this is never going to be seen by the people whose minds need to be changed. I doubt that anyone who is anti-abortion will ever look at the film except to ridicule it. The result is that this very complex issue will remain forever black and white.

The other problem with the film is that as good and as important it is the film is put together with such intensity that the film comes across at times a bit too insistent to get it's point across. Its not the material about out the fallout that plays this way, rather it's the sequences showing the anti-abortion forces which are cut to make the people behind it seem evil. It's not needed, the stories speak for themselves and showing angry protesters or smiling Republican lawmakers doesn't help the cause or will change minds. Forgive me I like the film and think it's vitally important, but there are times when it doesn't need to add an exclamation point to what is on the face of it a moving story.

Recommended for those interested in the  collateral damage of the abortion rights battle.

BIRTHRIGHT: A WAR STORY will be released by Abramorama in theaters starting July 14th in New York, followed by additional cities across the country including Los Angeles (July 28th), Chicago, San Francisco, Washington D.C. and more to be announced.
Posted by Steve Kopian at July 11, 2017