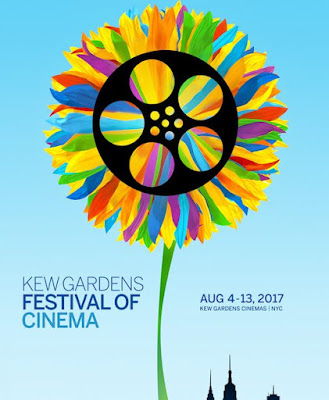 The first Kew Gardens Festival of Cinema begins Friday and it looks great. It’s got great selection of films (see below for some capsule reviews) and a great vibe. I’ve spoken with a few people from the fest and their enthusiasm is absolutely contagious. They are so excited that one of them has threatened to put me in a headlock if I don’t show up to the fest. (I’m trying to rearrange my schedule to do so)

Being held a literally couple dozen feet from the Kew Garden railroad station the fest is incredibly easy to get to from anywhere in New York. The cinema is also a short walk from the Union Turnpike stop on the E and F subway lines. There are also going to be screenings at other nearby locations such as the Queens Museum so if you can’t get into Kew Gardens maybe you can get to one of the other locations.

Since this is the first year I’m not sure what to expect. Personally ‘m looking forward to some of the special screenings at places like the Queens Museum, and there are a bunch of narrative features I’m interested in. I’ve seen a bunch of documentaries already (see below) and I’m jonesing for some more good films.

NEIGHBORHOOD UTOPIA
Once you get past the okay narration this is solid portrait of the Pointe-Saint Charles section of Montreal which has come together to battle the gentrification of the area for years. Its a super portrait of people proving that coming together really can make a difference.

A BRIDGE BETWEEN TWO WORLDS
Portrait of the farmers on the Indonesian Island of Flores who, with a little help from North America and European  families and friends have managed to lift themselves out of poverty by simply being given a chance to thrive. This is a lovely little film and definitely worth seeing.

HODA'S STORY
12 years in the life a girl named Hoda who was shot in the head while in school in the Gaza Strip becoming blind. Struggling to over come uncertainty and depression she chose to try and over come her injury and get an education. This is  deeply moving film that will leave you exhausted as we are forced to ponder what we would do in a similar situation and come to terms with the realization that sometimes we have to struggle.

THE LAST STOP
Portrait of the Elian School in Poland Maine which for decades used tough love to get troubled kids back on the right track. For some it worked for some it was a living hell. Full of personal accounts this film is a like a cinderblock to the head. How could this sort of thing have gone on for so long? Truly chilling documentary on a real place will curl your blood and your toes. This is a great film but might be a little too long at 122 minutes since the shock and awe leaves the viewer kind of broken.

MELANIE
FIlmmaker Susanne Helmer buys an 1970's hood hair dryer and wonders about the woman on the front of the box. As she tries to track the woman down she ponders who the woman is and what her life has been like. A funny often surreal blending of documentary and speculative fiction (Helmer recreates what she imagines her life to be). This is a one of a kind cinematic trip recommended for anyone who wants off the beaten path

CHASM
Experimental short film has a man meet a woman in the desert and what happens. Full of intriguing imagery the film will leave you thinking.

ENSEMBLESPIEL
Paul Krist's two minute long puzzle will either thrill you or leave you going WTF. It looks great but beyond that totally eludes me

JENNY GOT FAMOUS: LONELIEST HOUR
Music video where a man goes into space in a cardboard space shuttle. Amusing

PERSONA NON GRATA
Portrait of Japanese Foreign Ministry agent Chiune 'Sempo' Sugihara who issued over 2000 travel visas to the Jews of Lithuania and managed to get, perhaps, as many as 10,000 people out of the country before they could be picked up by the Nazis. This is a very good film that is hamstrung by a few technical issues such as uneven performances in English.  If you can brush aside the minor flaws, and you should, this is a moving film about a story most people will have no idea about.
Posted by Steve Kopian at July 31, 2017