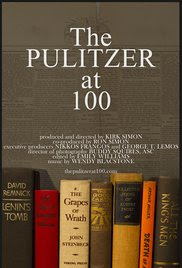 Nate Hood reviewed Pulitzer at 100 when it played last year at DOC NYC. Here is a repost now that it opens Friday in theaters.

Kirk Simon’s The Pulitzer at 100 is barely one step above a puff piece for the illustrious American prize for arts and letters. In exploring its history and social ramifications, it never delves too deeply into the seedier side of things. There’s hardly a mention of how the awards stonewalled some of America’s greatest literary voices besides a perfunctory montage of talking heads grimacing, shaking their heads, and muttering oh what a shame. (Although at its conclusion there is one talking head who insists that the most astounding thing about the Awards are how often they get things right.) There’s no exploration of the various winners who received official calls of revocation and forfeiture. And the film completely ignores several prestigious categories like Best Editorial Cartooning, Best Criticism, and Best General Non-Fiction. Somebody watching the film without any knowledge of the Awards would probably assume that the only existing categories are Best Reporting, Best Novel, Best Poetry, and Best Photography

But for a film barely one step above a puff piece, The Pulitzer at 100 remains a compelling documentary. The elements they do explore are approached with a refreshing level of frankness and honesty. Yes, many writers see the Pulitzer as one of the greatest achievements they could dream of, but they recognize that it casts a grim shadow over the rest of their careers; how do you follow up winning one of the world’s highest honors? Many reporters express a similar unease over the prospect of winning. Nicholas Kristof, columnist for The New York Times and two-time winner (’90, ’06), mentions how weird it felt to win a Pulitzer for his coverage of the 1989 Tiananmen Square crackdown. “The real winners were the students who protested,” Kristof mentions before continuing how “there is a certain irony in gaining from a surge of human misery.” The reporters from The Times-Picayune of New Orleans who won a Pulitzer for their coverage of Hurricane Katrina were unanimous in their declaration that they’d gladly trade their Prize to get their damaged city back.

Simon prevents his documentary from becoming a rote procession of talking heads with an interposed series of biographical vignettes about the Hungarian-born Joseph Pulitzer, the pioneering newspaper magnate who established the Awards—as well as the Columbia School of Journalism—in part to help rehabilitate the reputation of American journalism after souring it with years of Yellow Journalism. Simon also liberally peppers the film with inserts of famous actors and writers dramatically reading passages from Award-winning works. Though pleasant enough—I particularly enjoyed John Lithgow’s rendition of Robert Frost’s Stopping By Woods on a Snowy Evening—I couldn’t help but feel them largely unnecessary for Simon’s stated purpose of examining the Awards and their legacy.