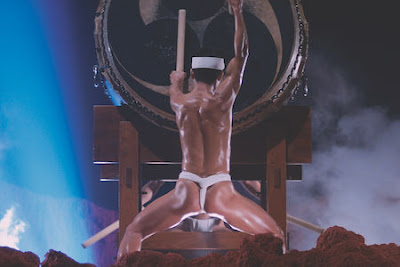 Director Tai Kato said THE ONDEKZA is the only film of his that turned out exactly as he wanted it. It is a towering achievement and one of the must sees at this years Japan Cuts.

The film is a portrait of the group The Ondekoza, a taiko drum based group which takes traditional pieces of music and turns them on their ear. The result is a melding of tradition with modern sensibilities. The film is largely a series of musical performances in various styles  that are designed not only to intrigue the ear but the eye as well.

I was enraptured by much of the film. I like taiko drumming and the various types of traditional Japanese music and performance and I was in heaven. There is a sense watching the film that the group relished the chance to do something special and Kato's camera allowed them to do just that.

This film is something magical and even if you aren't a huge fan of the music, the technical veruosity of the filmmaking is a joy to behold.