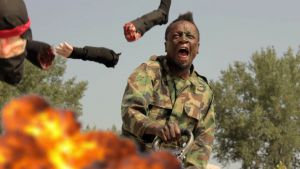 Wildly over long no budget film is set decades when in the future when Quebec has gained its independence and fights for its survival against ninjas, zombies and other factions. As the battle rages the son of the leader has to step up and take command.

The sort of no budget film with a knowing script that you either buy and go with the vibe or its one that you flee from in disgust.  I was fine for about 20 minutes until the realization came that the film was kind of operating on a single level and not getting any better. I could have gone along with it if there was something more to the script but it isn't very clever. It simply can't support an almost two hour running time with out imploding.

One of the major disappointments at Fantasia.
Posted by Steve Kopian at July 18, 2017

Email ThisBlogThis!Share to TwitterShare to FacebookShare to Pinterest
Labels: Fantasia 2017, not worth the effort, science fiction