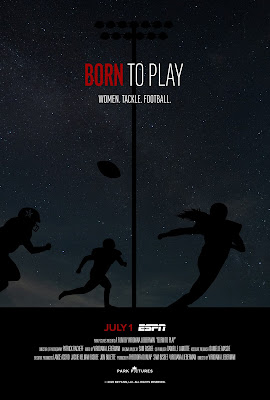 The kicker in BORN TO PLAY is at the very end. One of the coaches reads a letter from he mother of a young girl who wants nothing more than to play football for the Boston Renegades. Not only does the letter choke up the coach it made me more than a little misty and in that moment the BORN TO PLAY goes from being a good film to being a great one because it all comes together.

BORN TO PLAY is the story of the Boston Renegades, a team in a semi-pro football league. The women compete with teams around the country and are good enough that one of their players comes from Texas every weekend just to play with them. They are pretty much like any other sports team except that they are doing it for love not money since they have to pay for things themselves as well as raise money through fundraisers.

For most of it’s running time BORN TO PLAY is a very good, if very workman like sports documentary. It’s very similar to almost any other film about a sports team doing what they love except that it is a sport that is traditionally a men’s sport and the team is all women. As a result there is a lot of talk about breaking barriers and doing what you love… and you know the drill…. Or you think you do.

I know I did and then I got to the end of the film and was floored. It’s in the final moments and in the reading of the letter that director Viridiana Lieberman pulls all the threads together. It is in the final moments that all of the seeming “been there and done that” moments spring to life and they take on a new sheen, they are not been there and done that, they are actually something incredibly wondrous and special and they actually mean something- something incredibly important and earth shaking (or world changing). In that final moment, that has been perfectly built up to by director Lieberman lightning strikes and we understand the enormity of what the Renegades existing means.

BORN TO PLAY premieres tonight on ESPN at 9PM with repeats through the month. It is highly recommended- just watch the whole thing and you’ll know why.
Posted by Steve Kopian at July 01, 2020